Elsewhere is that dream near 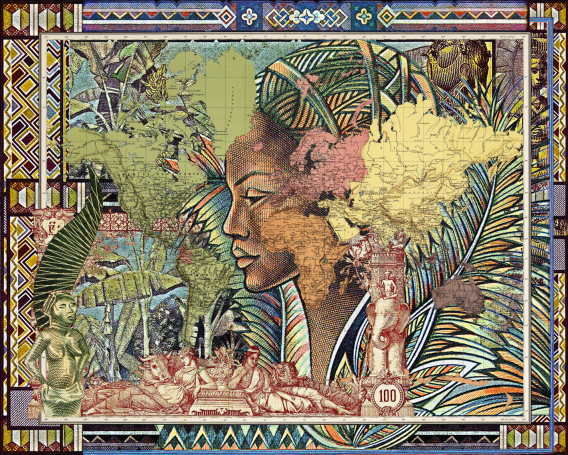 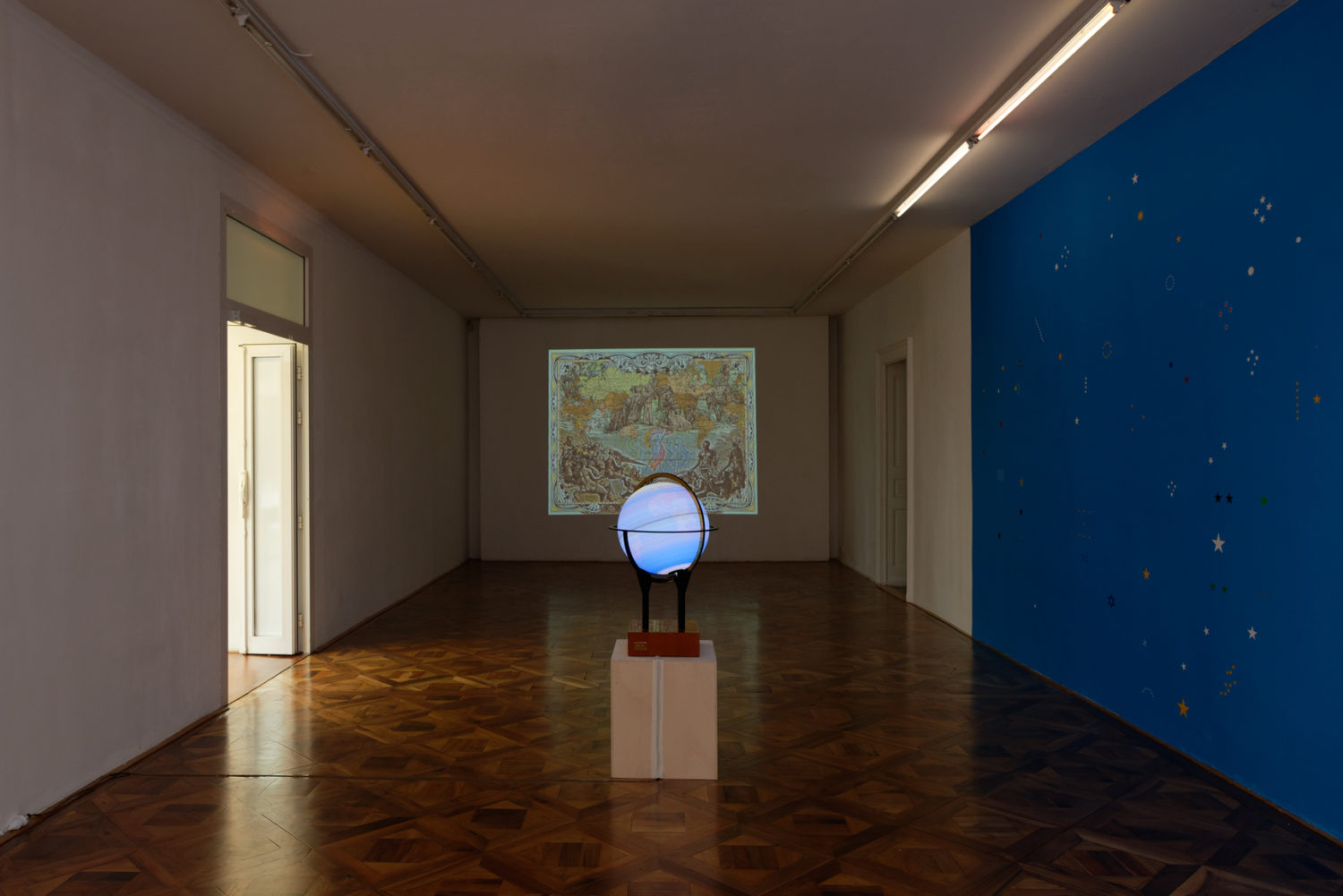 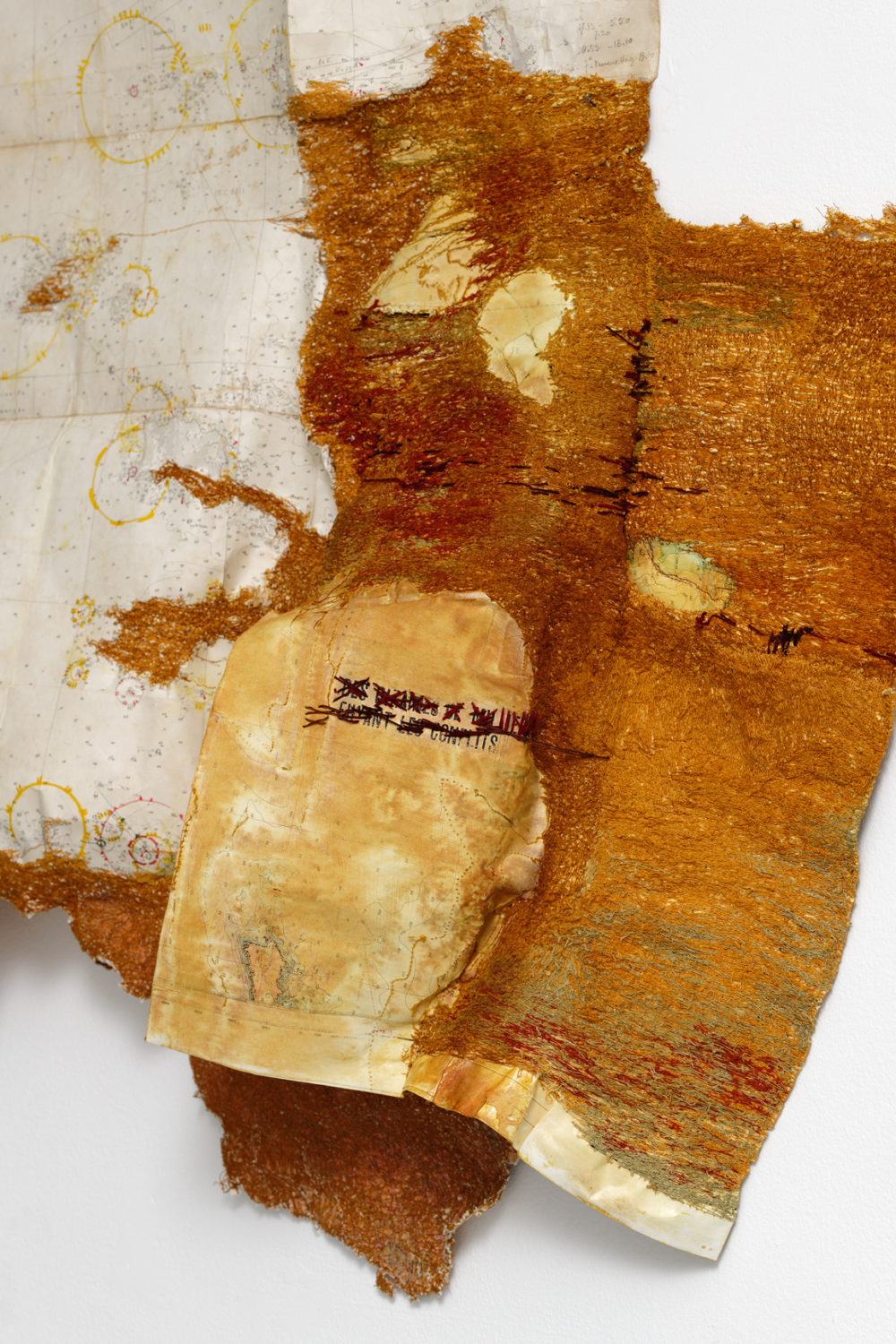 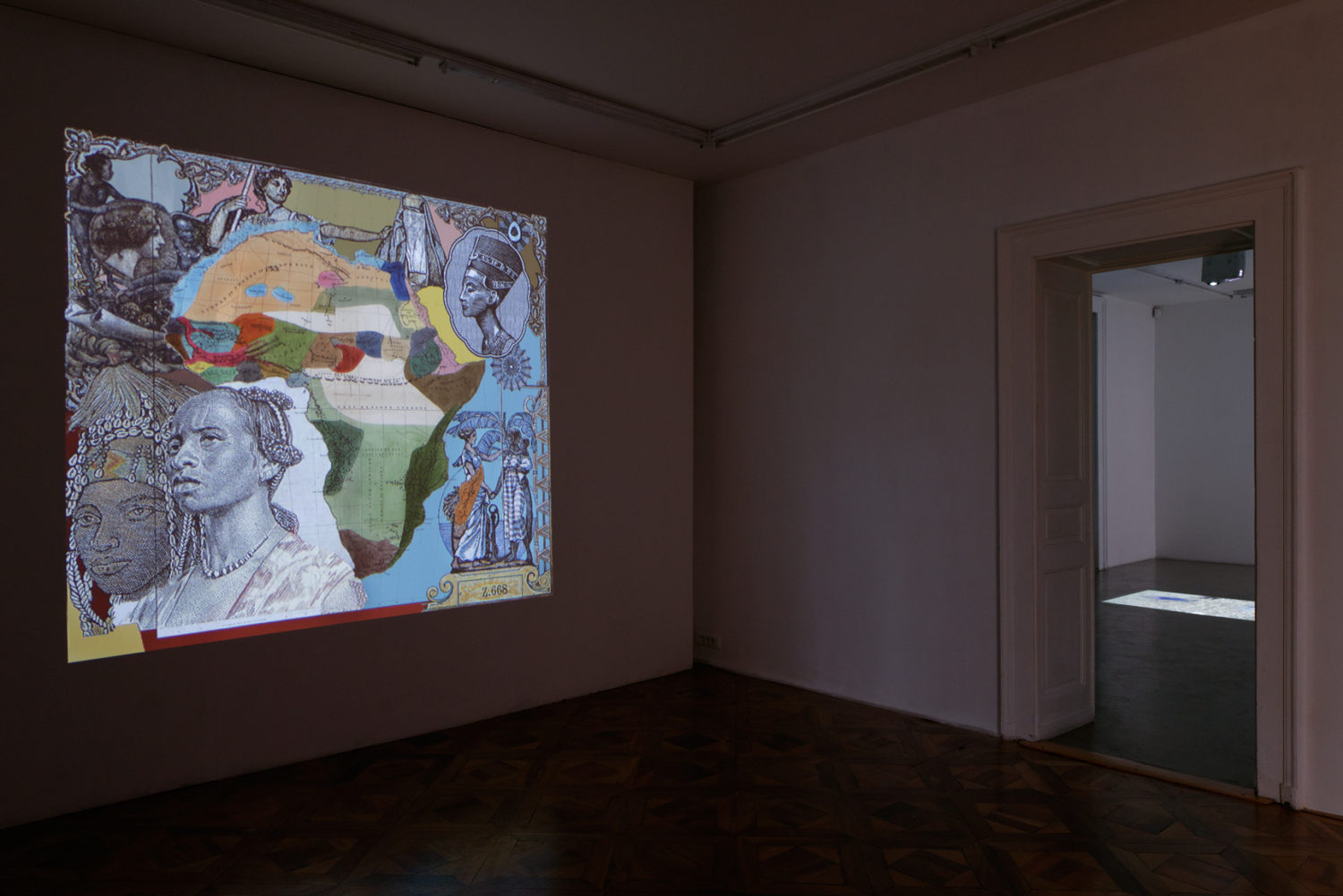 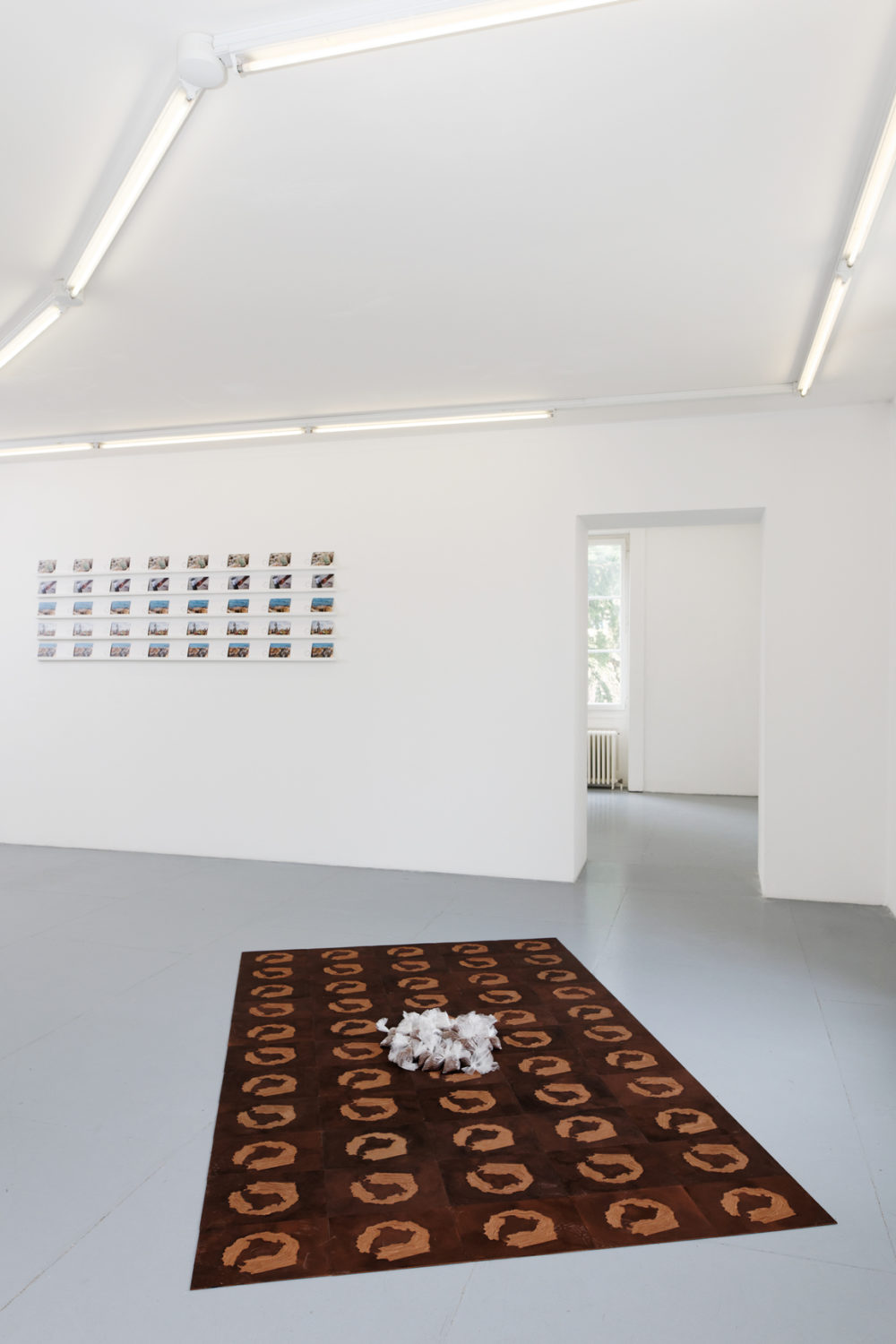 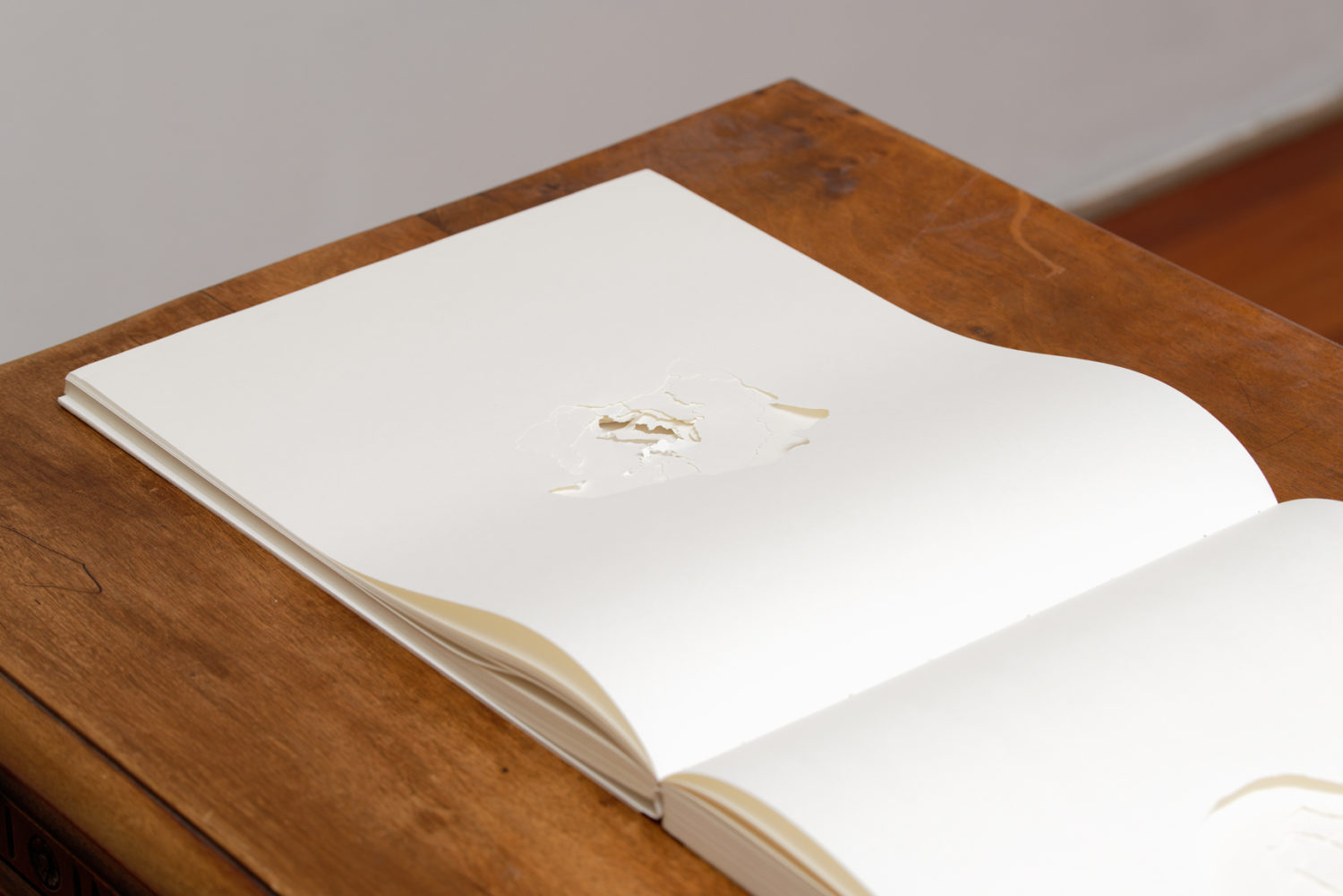 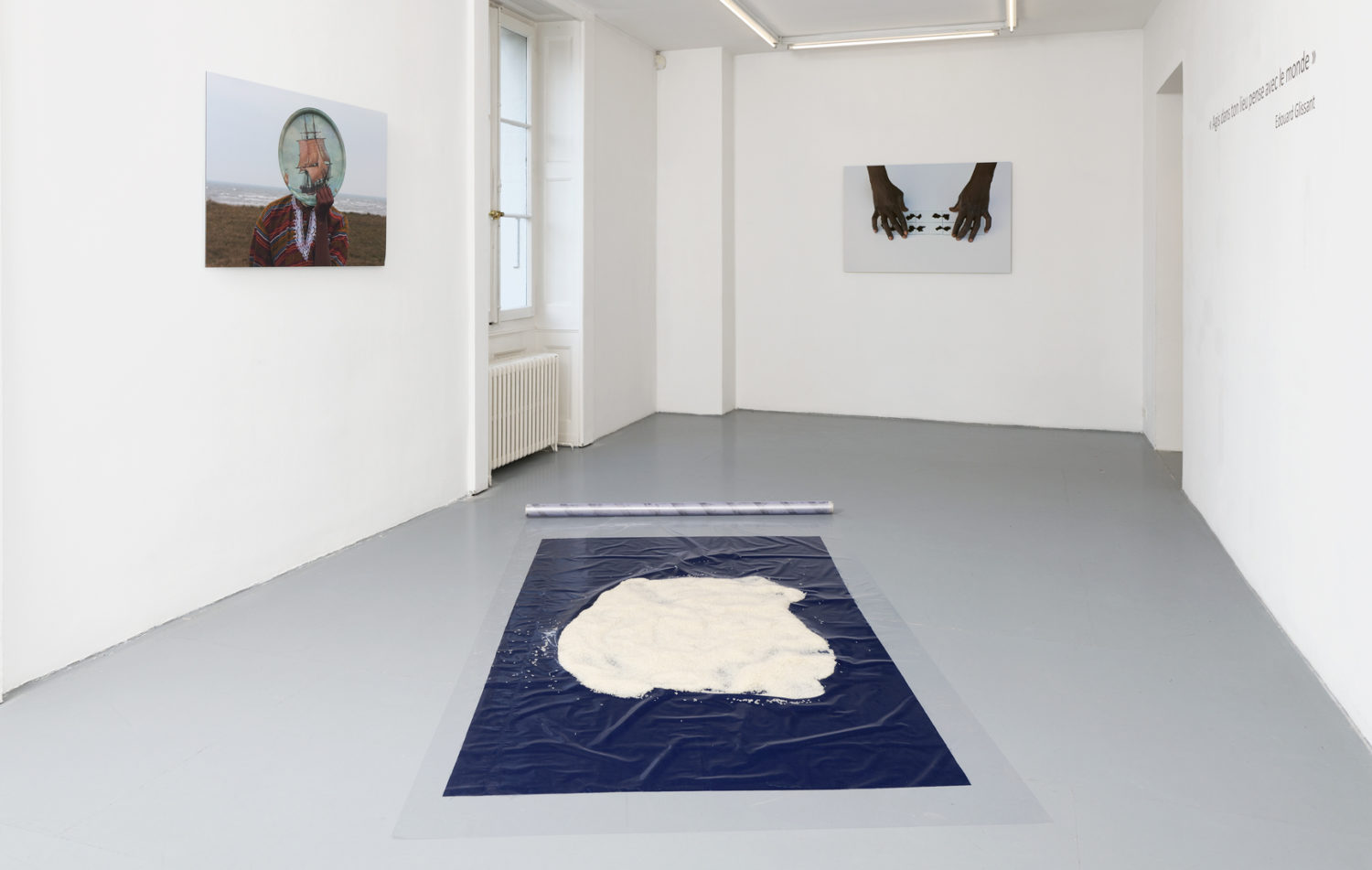 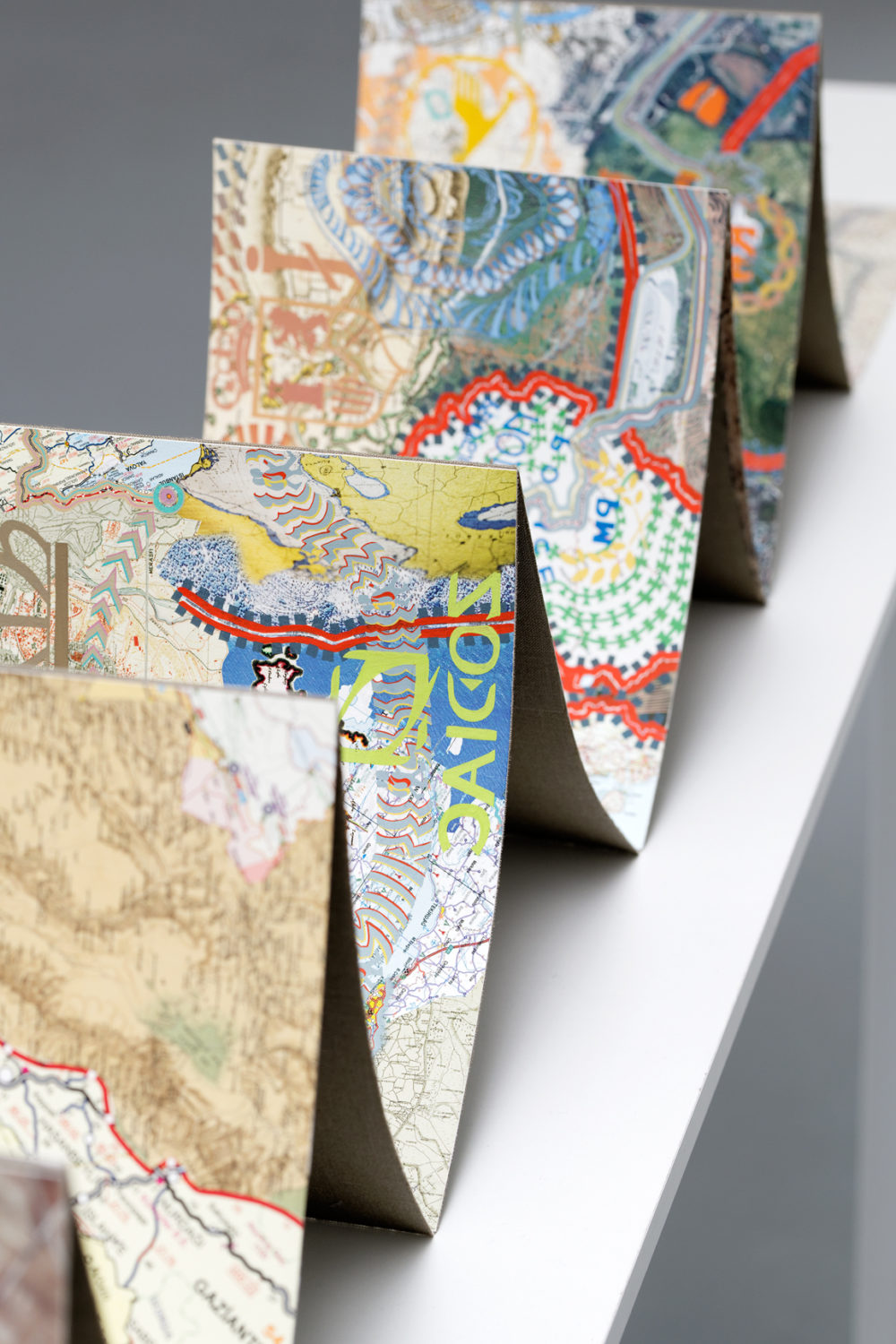 Elsewhere is that dream near

elsewhere is that dream near

the murmur of trusting waters

I am a turning point

Ailleurs est ce rêve proche, “Elsewhere is that dream near” is like an Oasis of blank pages to be covered with new narratives and cultures in order to reinvent the world. On the threshold of the exhibition, the artist Golnaz Payani’s immaculate sculpted atlas, which hollowed out at its center, forms a lacework of abstract borders, allowing visitors to plunge into a void of potentialities waiting to be filled.

Nearby Fayçal Baghriche’s Souvenir (2012) is seen emitting its bluish light, a distant childlike memory of the artist’s. The globe is whirling too quickly. Indeed it could make visitors’ heads spin. Lands blur and blend into one another, borders disappear and cancel each other out. The earth, “blue as an orange,” ¹ glows, giving rise to a blue sky covered with stars in a poetic and pacific Épuration élective (Elective Purification, 2009) of the globe’s flags. In counterpoint, the continents are adorned with familiar Figures (2015 – in progress). The symbols of power and conquests borrowed from banknotes, stamps, atlases, and so on, create forceful visual compositions in a subversion of geographical manipulations and the lies of history. With the video Blending Figures (2017), the artist Malala Andrialavidrazana compels us to look straight at the truth of a world torn by the violence of power relationships. A world that is constructed, deconstructed, baptized, drawn, and molded by economic and political forces as conquests, conflicts and wars wax and wane.

The Gaza Strip, a conflict around belonging and identity, the result of immigrations, is a territory that is guarded and seized by arms, like the knife being thrown by men to trace new borders on a beach located between Gaza and Ashkelon. Two cities separated by one border yet sharing the same beach. Watching Sigalit Landau’s video Azkelon (2011), which is gently punctuated by the rhythm of the waves on the shore, we are reminded of these words by the writer Léonora Miano:

“Borders evoke relationships. They tell us people have met, sometimes in violence, hate, contempt, and in spite of that, they have given birth to meaning.” ²

In search of meaning, the rhythm of the waves accompanies us to the first floor, where we are met by the Tunisian seascapes of Héla Ammar. Here the horizon seems to play tricks on us, creating an optical illusion as if drunk with the despair the dreams and other pleasant illusions of candidates for migration, who are seeking not meaning but simply a future, were running into an elusive horizon. A litany of disillusions echoes throughout the space, “Because I am already dead here”; “because nobody is interested in us”; “because I had no other choice”; “because it’s my only way out…”

On the other side of the Mediterranean on the shores of Europe, the horizon is filling with frustration and tensions. Caroline Trucco’s postcards, ironically entitled Bons Baisers de Vintimille (From Vintimille with Love), conjure up the immigration situation in the Mediterranean zone, i.e., the closing of borders and the hunting down of migrants as well as those who are welcoming them or providing them with help. Facing these names written on the rocks, with clothing strewing the beaches, these words by Aimé Césaire ring out:

“My castaway eyes search the horizon. The sky gapes with a black absence.”

In Marta Caradec’s drawings that sky is indeed dark and threatening. Oronte (2017) is an artificial landscape that is in fact a collage of images of the Orontes River borrowed from Google Maps in satellite view. The Orontes has its source in central Lebanon and flows to the Mediterranean, passing through Homs and Antioch. The course of the river is a metaphor of the flow of refugees, whose stories sketch out a counter-geography in a book called Aller simple (One Way, 2017). The rigidity of maps and borders is set off against personal stories, the individual experiences of men and women who are ready to sacrifice everything to reach an elsewhere that is so close yet strewn with traps. The trajectories become intertwined at the borders like sutures of a geography that has to be mended and cared for.

Stitches proliferate in and even take over Cathryn Boch’s topographical and maritime charts and ripped, abraded and grafted maps. Working in a place between wounds and healing, disintegration and reconstruction, the artist, born on the French-German border, deploys a network of territories in transformation, where “grafting is to affirm a host of possibilities in order to give rise to a world.” ³ Boch’s fragile pieces display an emotional experience of geography that beautifully illustrates that inner elsewhere, not distant and foreign, but private and familiar, like a deep meditation, an inner drive to articulate a relationship between oneself and the other, oneself and the world. It is a mediation to which the artist Julien Creuzet seems to invite viewers with the photograph Horizon introspectif (Introspective Horizon, 2010). Steeped in the thought of Edouard Glissant and Tout-Monde ⁴, this West Indian artist defines himself “as a maker of form-worlds, of little bits of artwork-islands composed in an archipelago.” ⁵ It is an archipelago drawn with the ends of his feet on a white-rice beach stretching out over a sea of blue cloth, producing Opéra archipel, île blanche, riz bleu, la piste de danse… (Archipelago Opera, White Island, Blue Rice, Dance Floor, 2015). A danced cartography, a performative geography, to mentally span territories like in the game of dominoes, imagined and activated by Caroline Trucco. Further along in the show this artist from Nice invites us to traverse the furrows and folds of Deception Island in the Antarctic Ocean, a desolate island inhospitable to man. It is a place that is the antithesis of the Terre promise (Promised Land, 2018), the mirage of a lost paradise whose intoxicating perfume, lingering in the wake of a performance by the artist Ninar Esber, teases our senses and drives us wild.

For four kids sitting on a beach of Luanda, Angola, America embodies the Promised Land they have long fantasized about. Sporting flip-flops they see themselves “turning” the world in a taxi, transcending their reality for a few moments while they imagine their wealth and success. In a video called Cambeck (2011), the artist Binelde Hyrcan conjures up the situation in his native country scarred by 25 years of civil war, where America represents the only possible horizon for many young people.

Is the flight of the world” ⁶

Although ever since the Donald showed up, the Promised Land has no longer been so providential. The mirage is crumbling. So help yourself to a little of the Poétique de la Résistance which is scattered around the exhibition space and the City of Annemasse to conjure up a tortured geography.