La Villa du Parc art center is located in a detached house built in 1865 by Claude-Philippe Dusonchet, syndic and later Mayor of Annemasse (1854-1871). This typical bourgeois house stands in the middle of a wooded park of just over four acres. The City of Annemasse purchased the property in 1930 with the intention of turning it into a public park.

The house has twelve rooms, vaulted cellars, and a porch whose roof also serves as a balcony for the first floor. It was successively home to Annemasse’s district court and the police station.

In 1982, a group of artists, industrialists, and well-known figures from the socio-educational realm met with Robert Borrel, the then Mayor of Annemasse (1977-2008), and his city councilor to request that a permanent exhibition venue be opened. The “Villa du Parc” Association was founded to manage and actively support an “exhibition center and permanent venue for shared activities.” With financial support from city and federal authorities and the General Council, as well as the patronage of industrialists, La Villa du Parc opened its doors to the public in 1986 with its very first show, “Art and Industry” (21 June – 15 August).

In 2006, the building was enlarged by adding glass windowing to the porch, making a modern architectural gesture possible which shifted the building’s main entrance to its façade along rue de Genève. Today the porch houses a reception area and an exhibition space.

La Villa du Parc’s east and north façades have been the subject of mural artworks specifically commissioned from the artists and reflecting on the outside of La Villa the art and cultural activities going on inside.

Légers décalages (Slight Shifts) on the east (red) façade was done by the French artist Christophe Cuzin in 2006. It’s a wall painting that is a 1:1-scale reproduction of the exact layout of the façade but tilted 15°, emphasizing the building’s architectural design through that shift. By making the façade layout the very aim of his artwork, Cuzin plays with the correspondence between illusion and reality, pictorial and architectural space, the painted façade and the reality of the physical façade. This piece offers a joyous and mischievous perception of painting in public space, representing the very support of his work on the building through a play of colors, light and the spatialization of painting.

In 2011 Clément Laigle was selected to paint the art center’s north façade as part of his solo show titled Losing Sight.

The north façade was once again the site of an artwork, this time by the Swiss artist Didier Rittener in 2014. The monumental drawing done in graphite pencil depicted geometrical shapes in perspective along with excerpts from the paintings of Kazimir Malevich, one of the pioneers of modern abstract painting. Drawn into the house’s roughcast exterior, the graphite seemed to vibrate according to the light and the density of the gray shadowing on each shape, which lent the façade a light, dancing look. Rittener’s piece was erased in 2019.

In 2021, as part of her solo show Aimée at La Villa du Parc, Renée Levi created a wall painting that functions as both a signature and a homage. The painting associates two tools and two gestures that are opposites, on the face of it. Scotch tape, which forms and fixes the drawing’s lines, is typical of modern geometric painting, while spray paint, which projects color, references tagging and urban culture. The ée is Renée and her graffiti artist’s tag. It’s also Aimée (Stitelmann), a woman who is honored for having saved Jewish children during World War II, getting them across the French-Swiss border near Annemasse. Finally, it’s all the ées whose inclusive vowel is universalized here in all its sonority. Graphic, colorful, é and e go hand in hand, deploying their loops and bluish hue while strongly asserting the feminine in a public space. 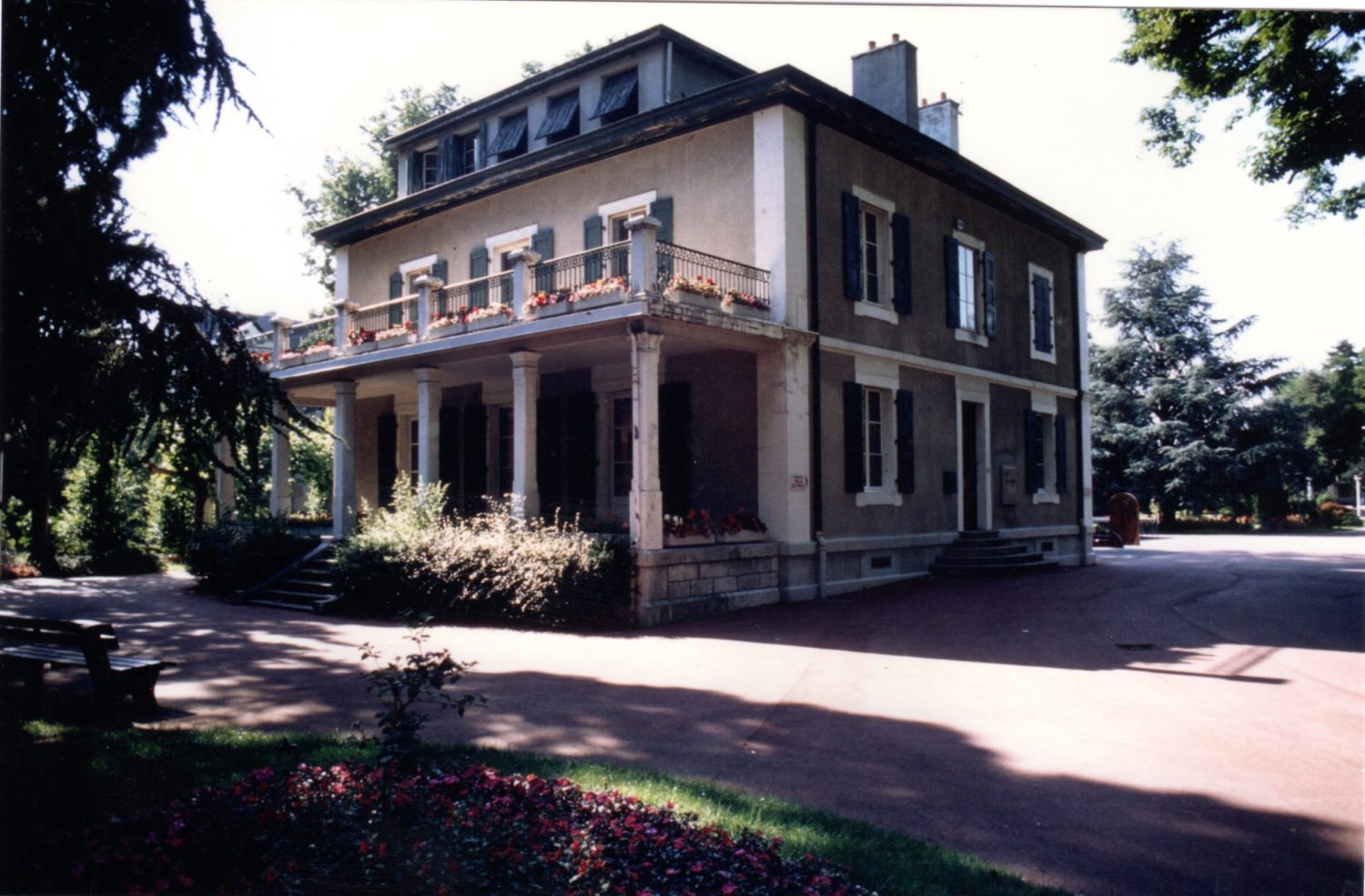 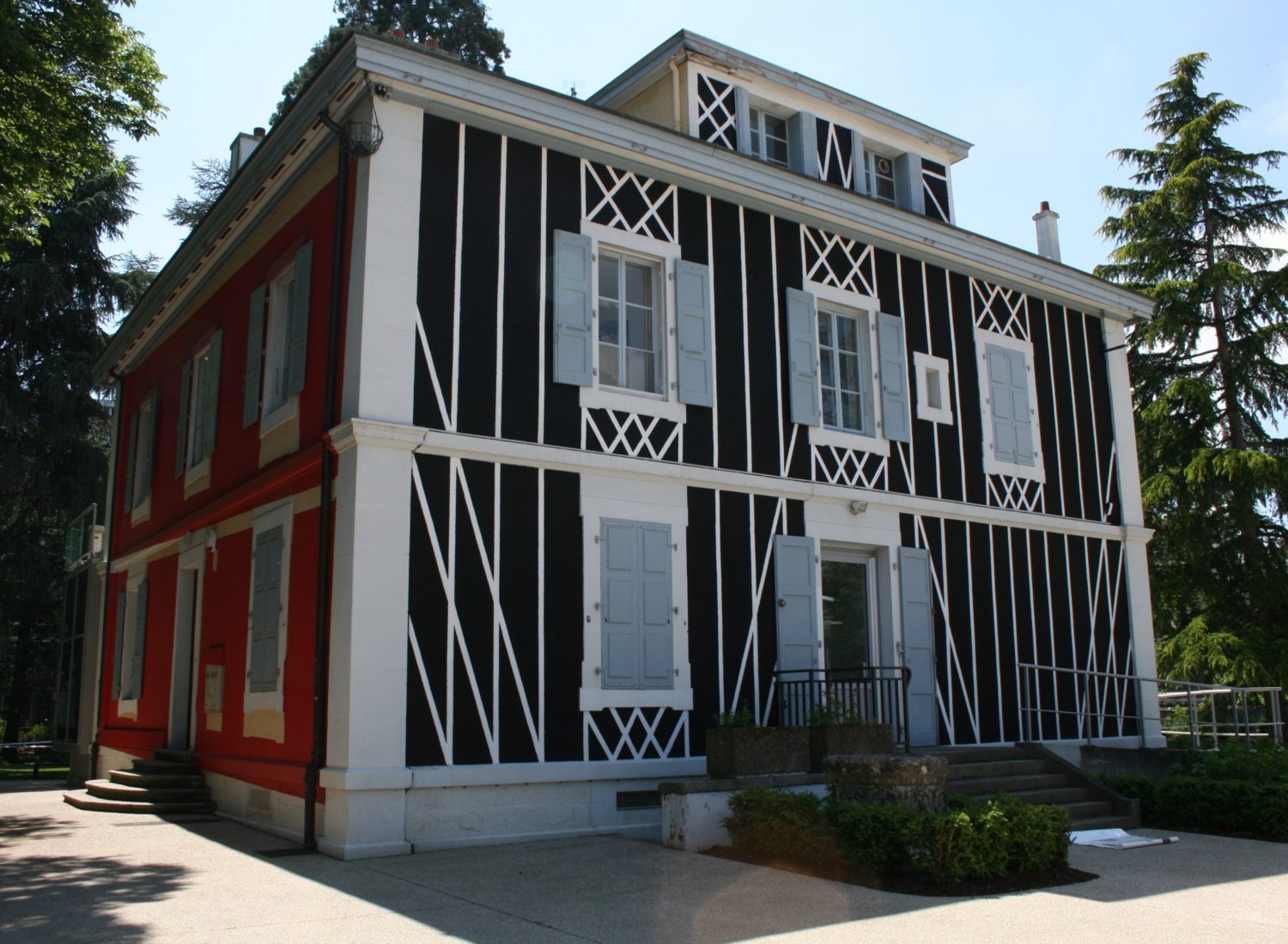 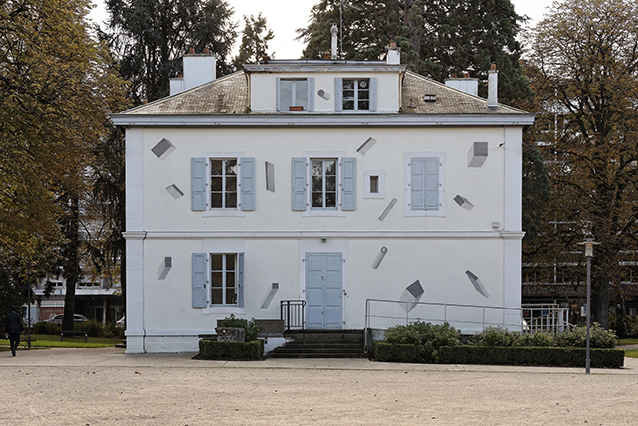 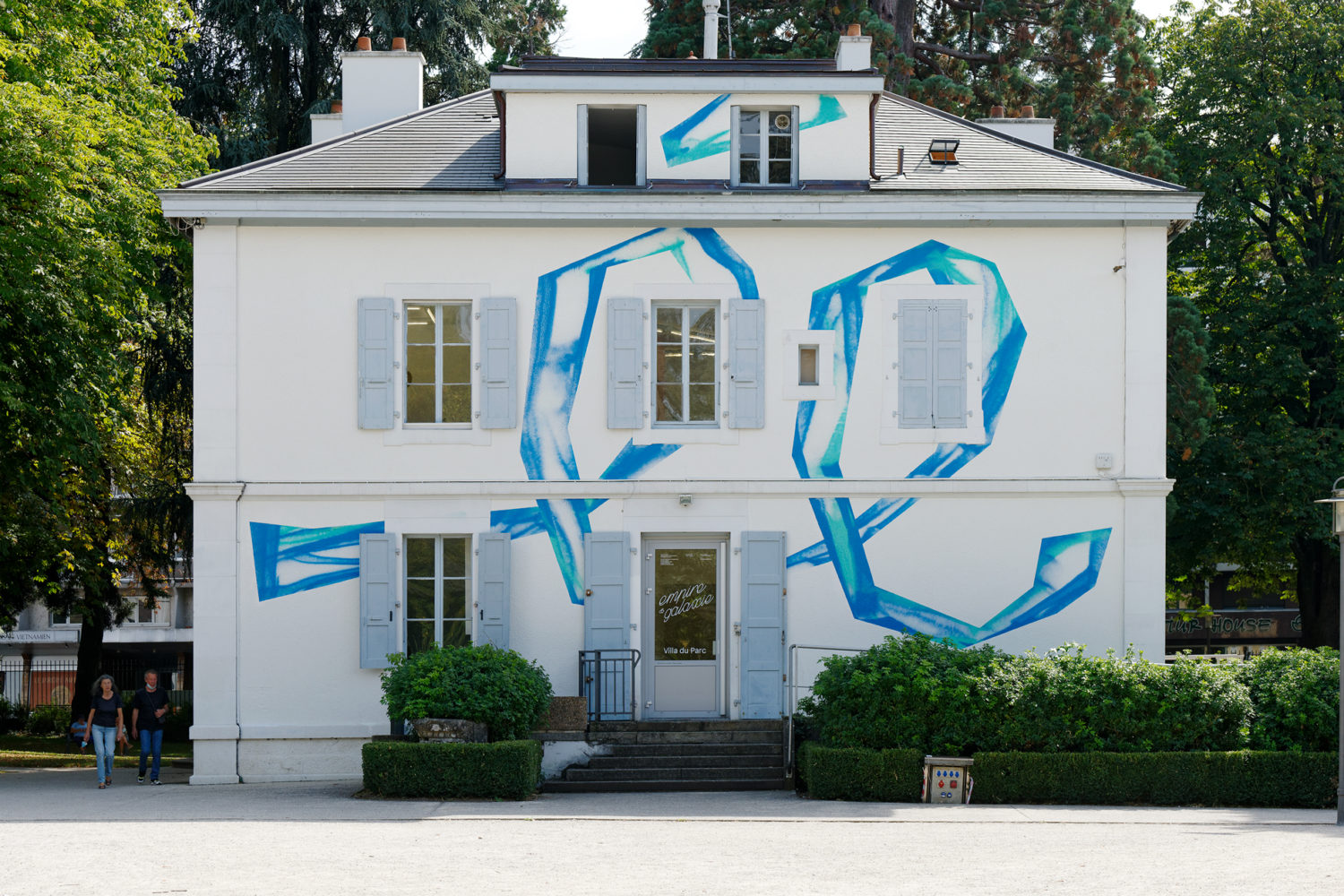