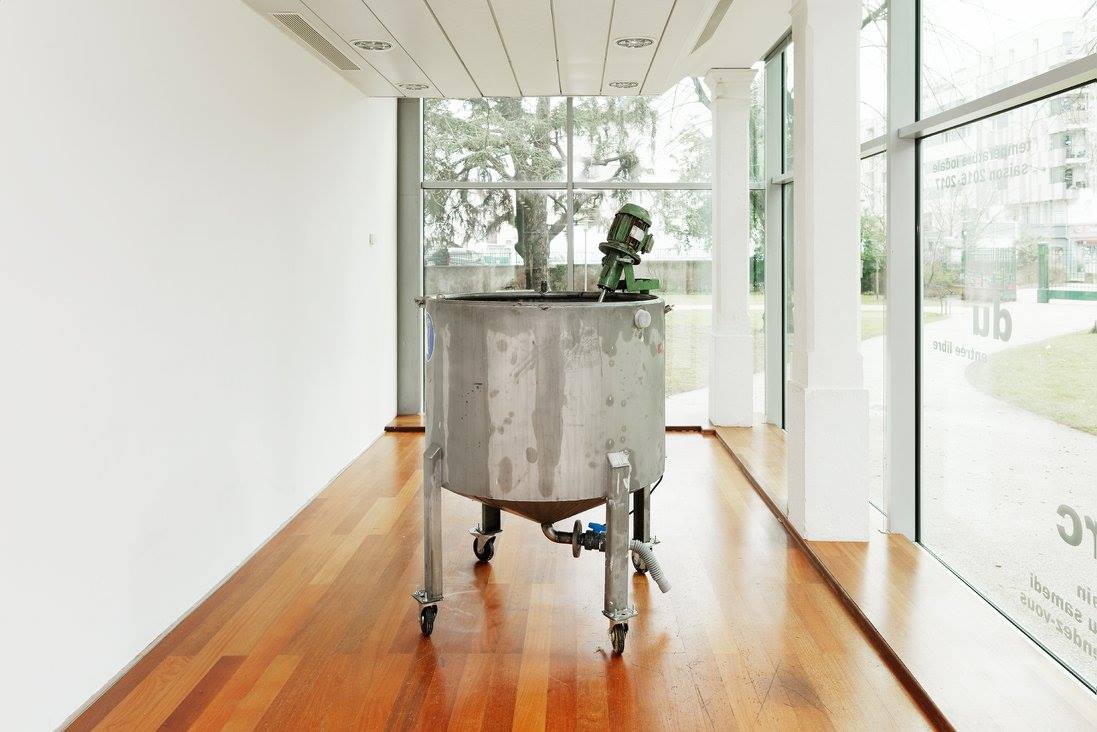 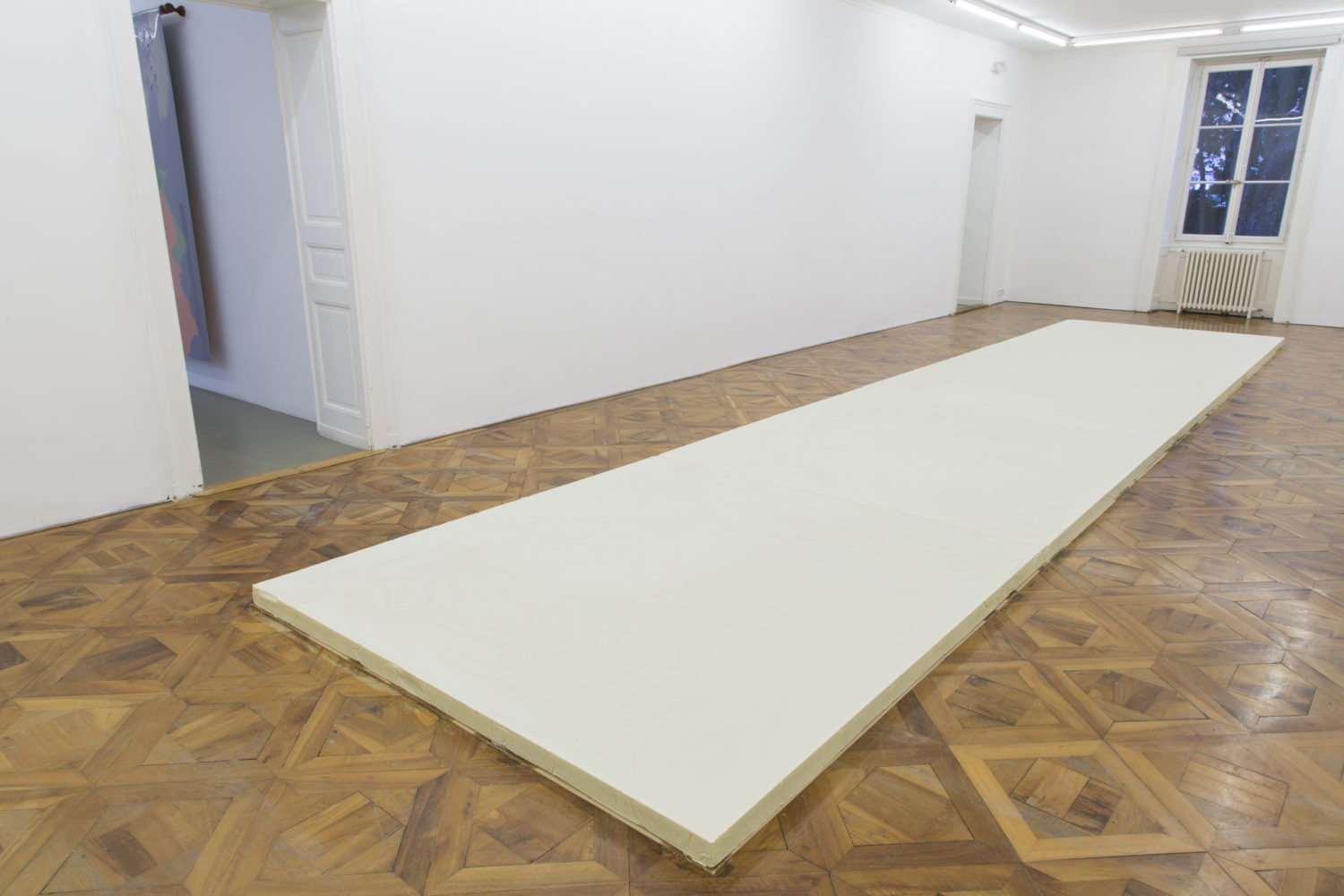 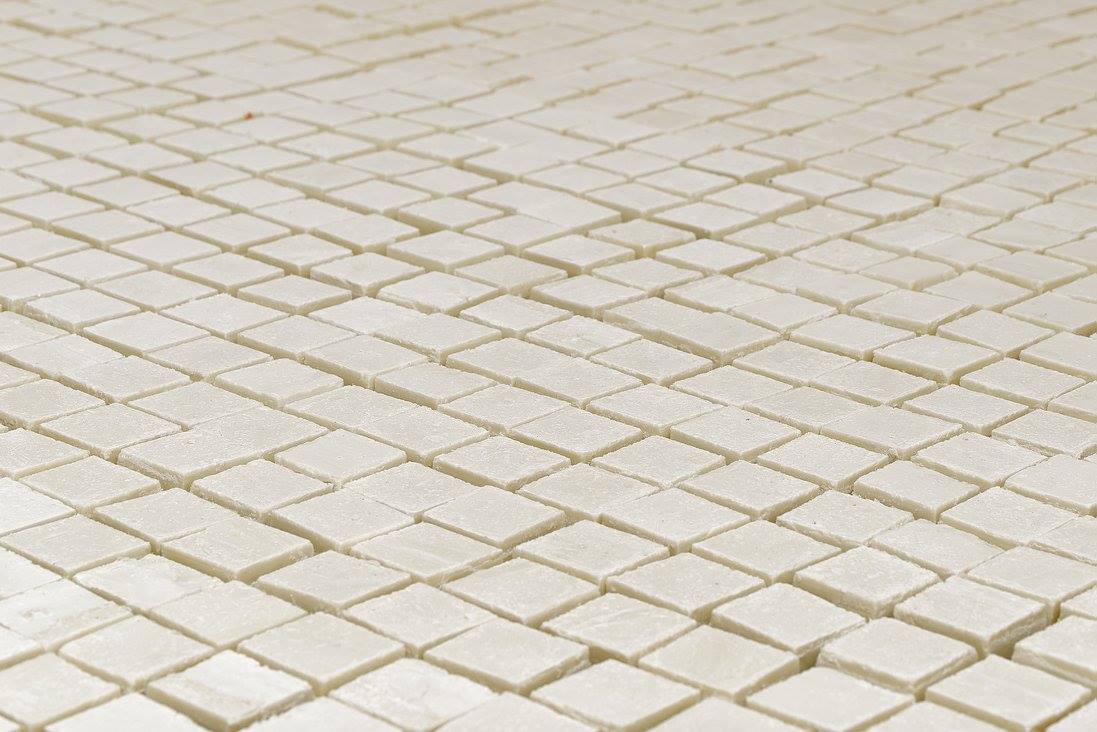 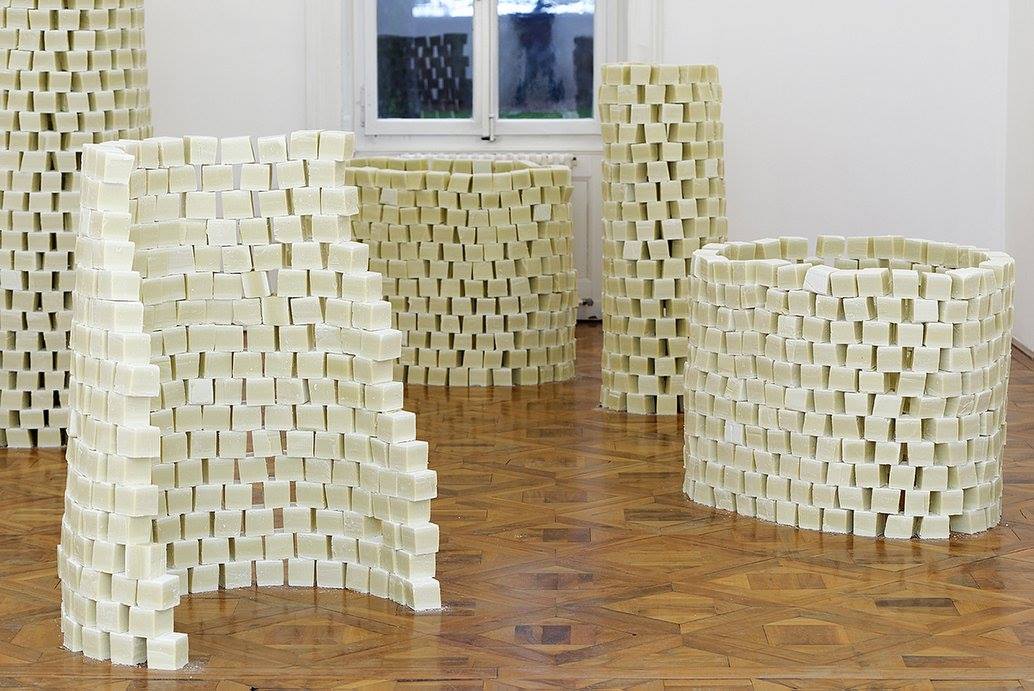 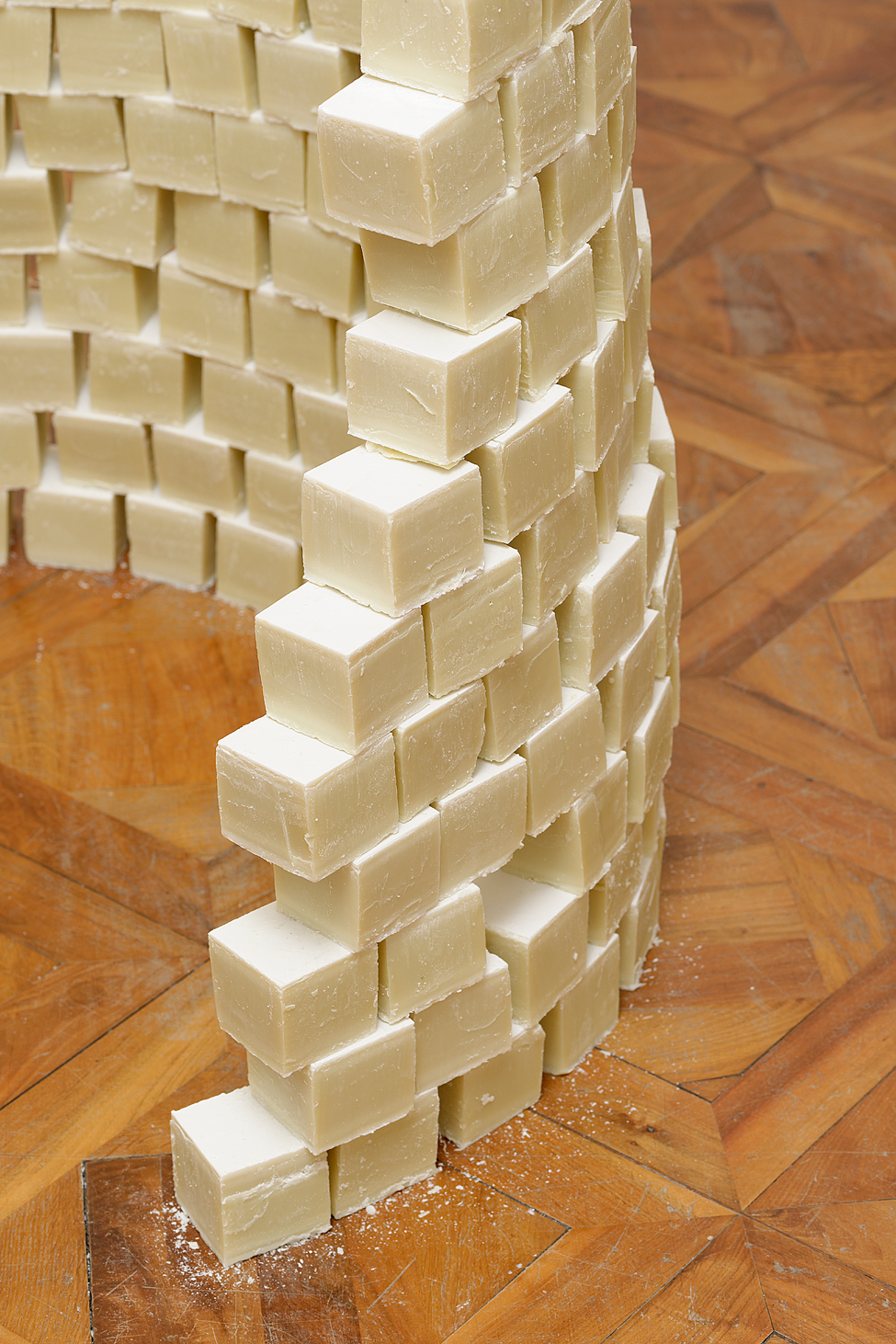 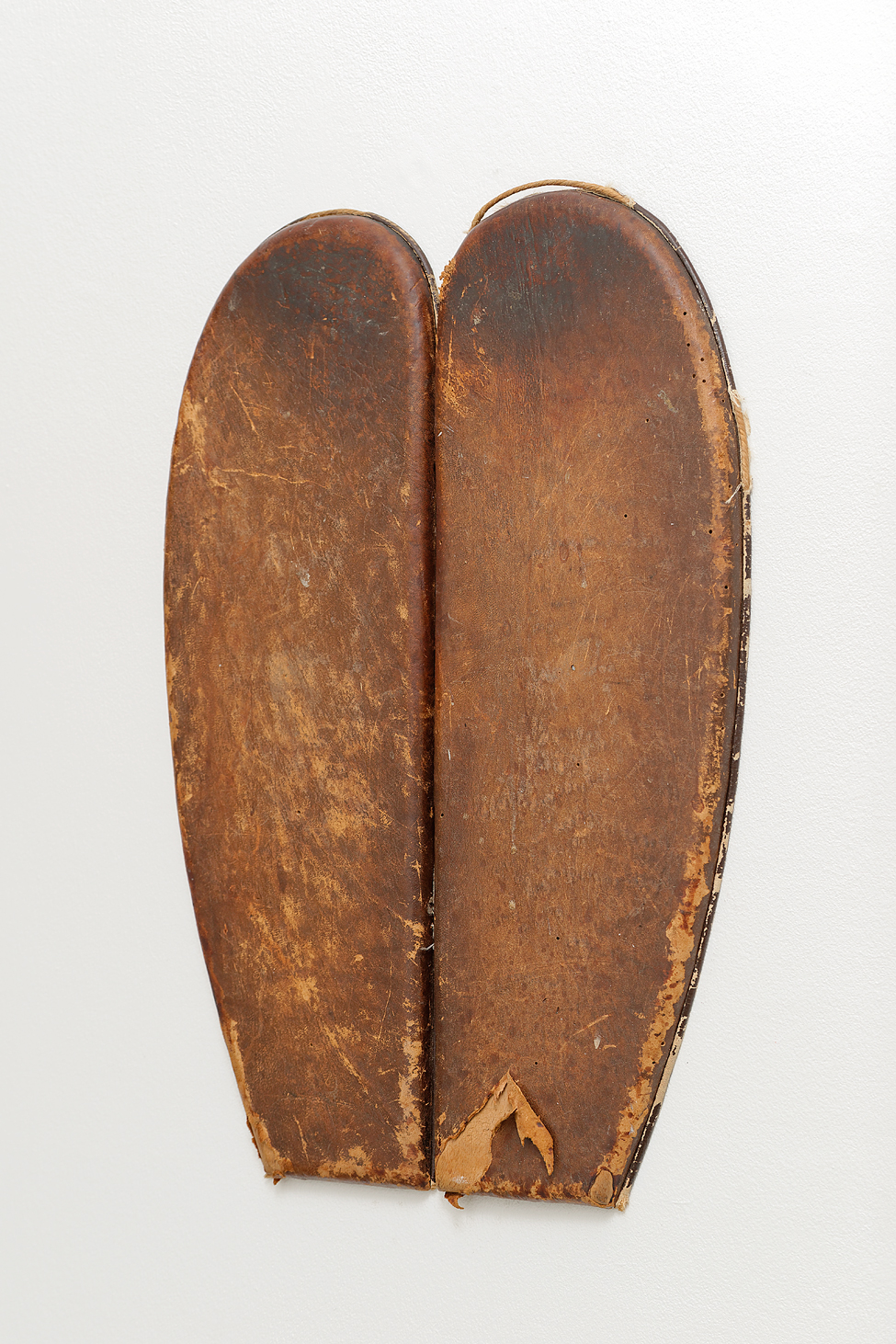 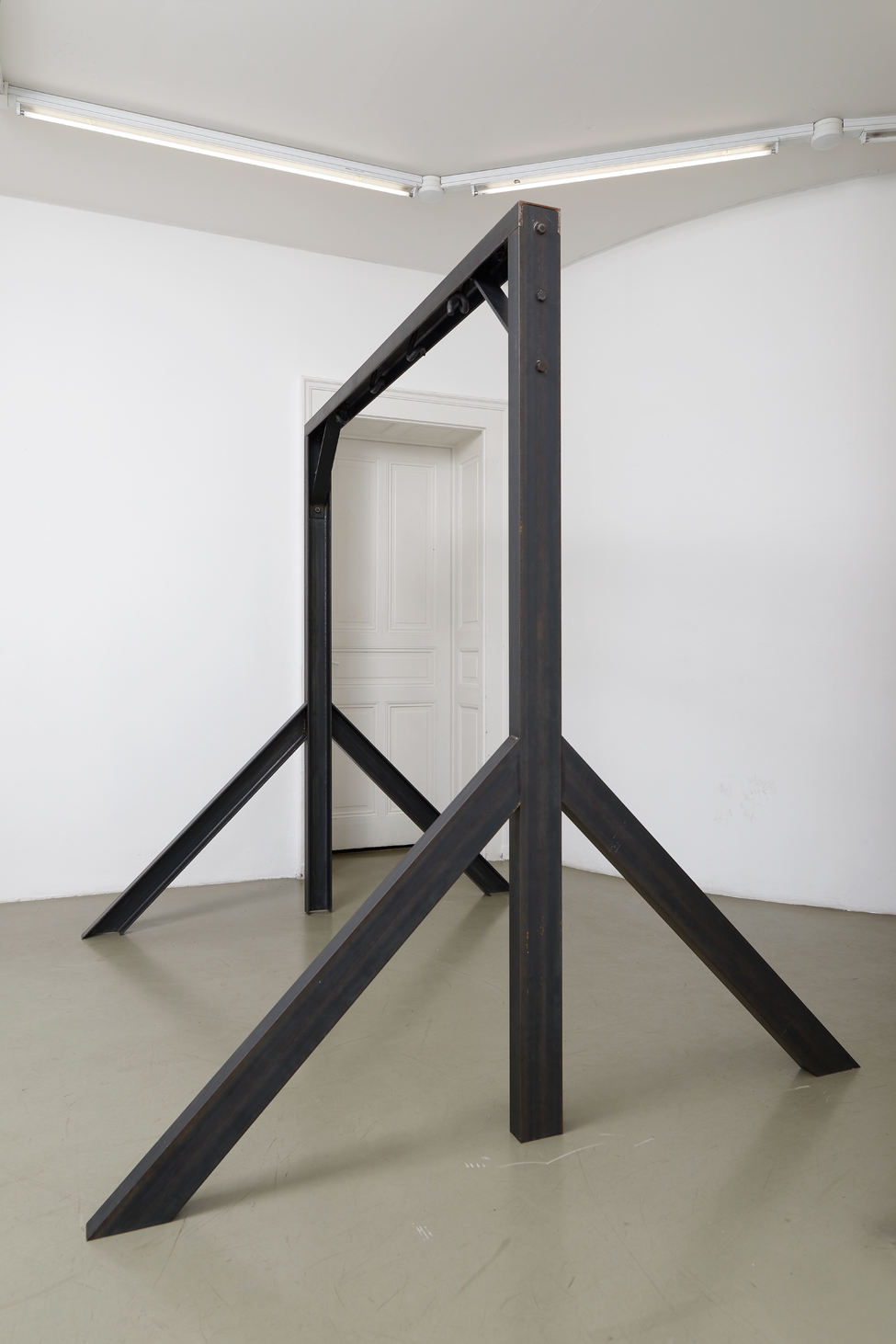 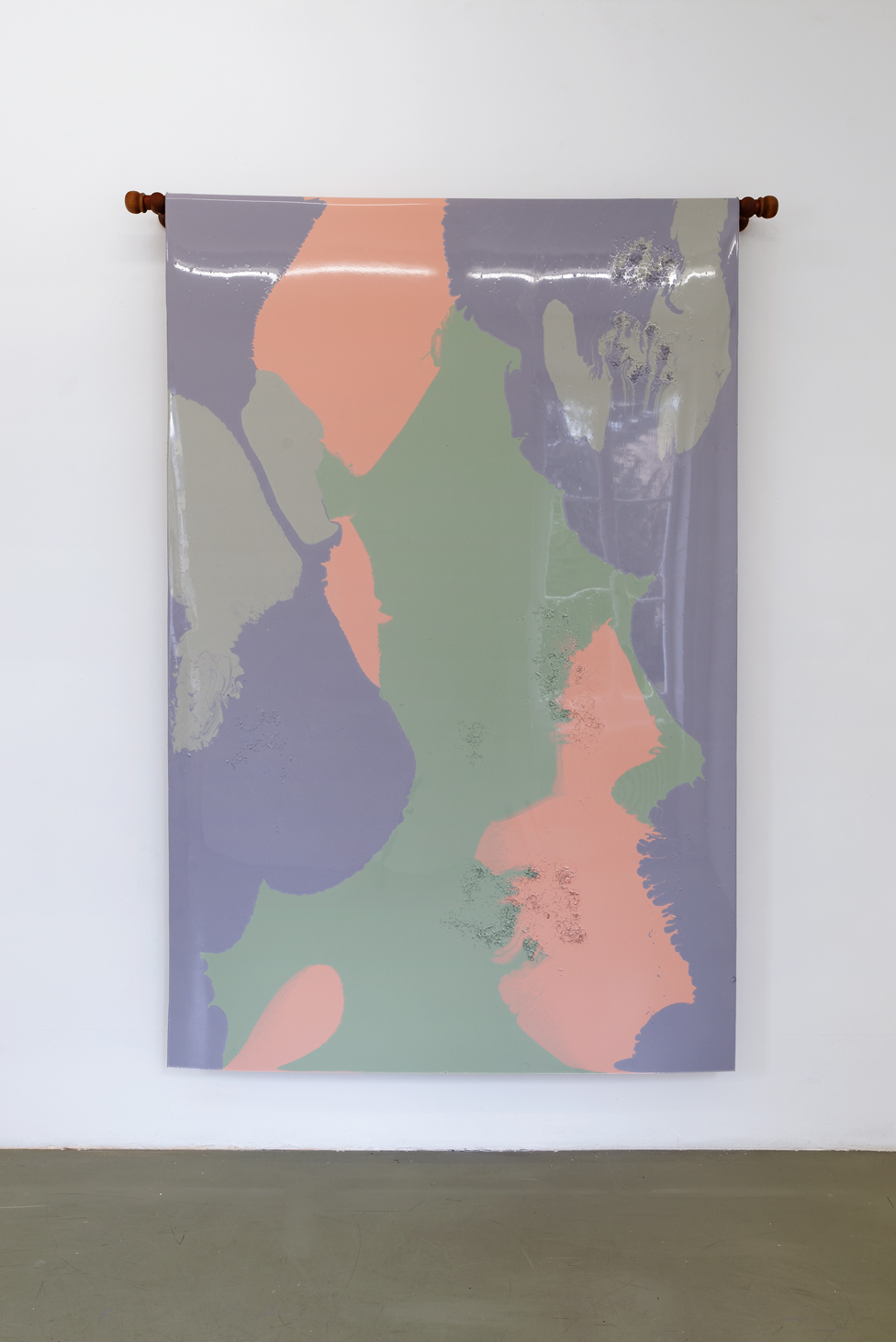 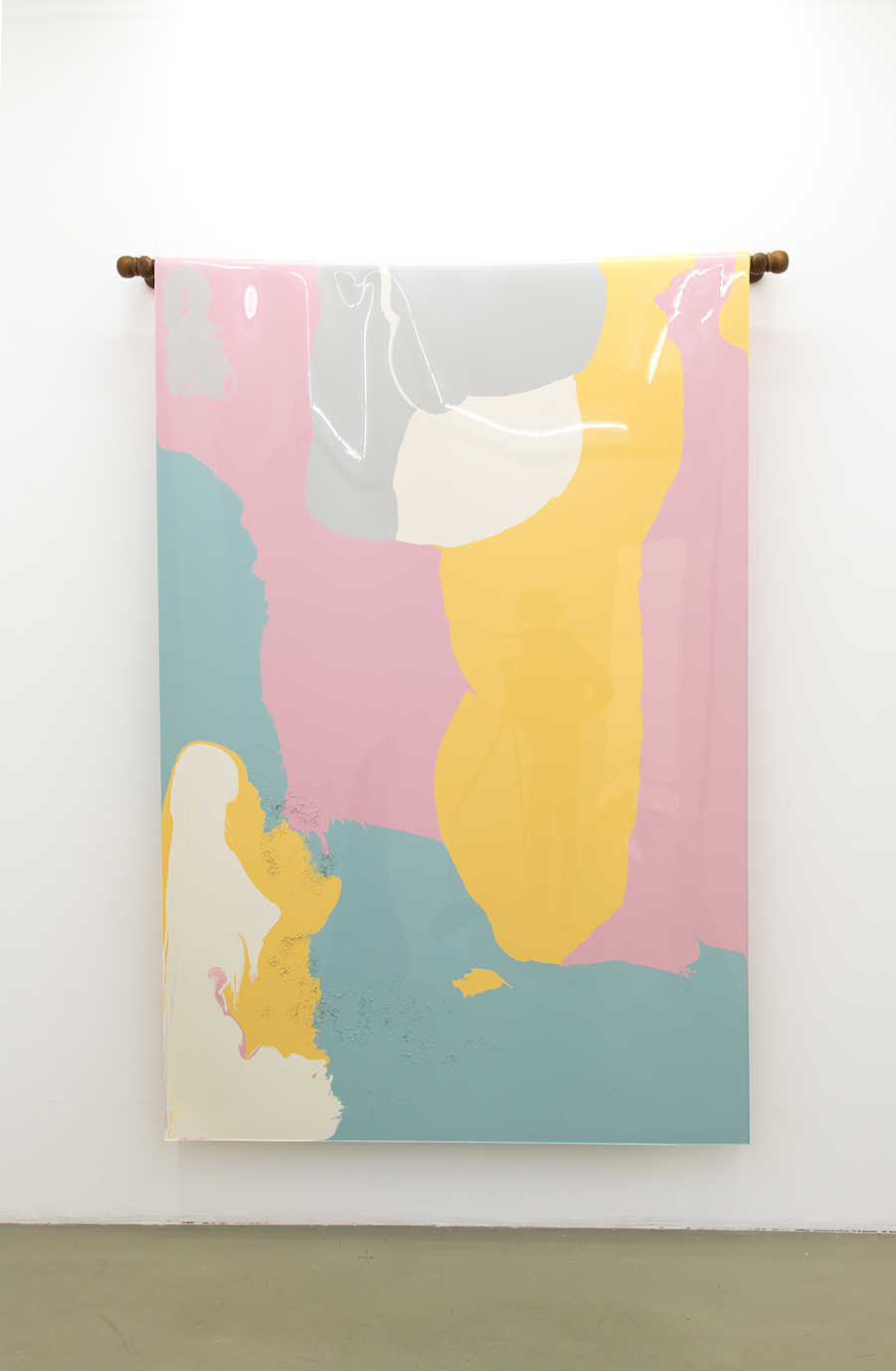 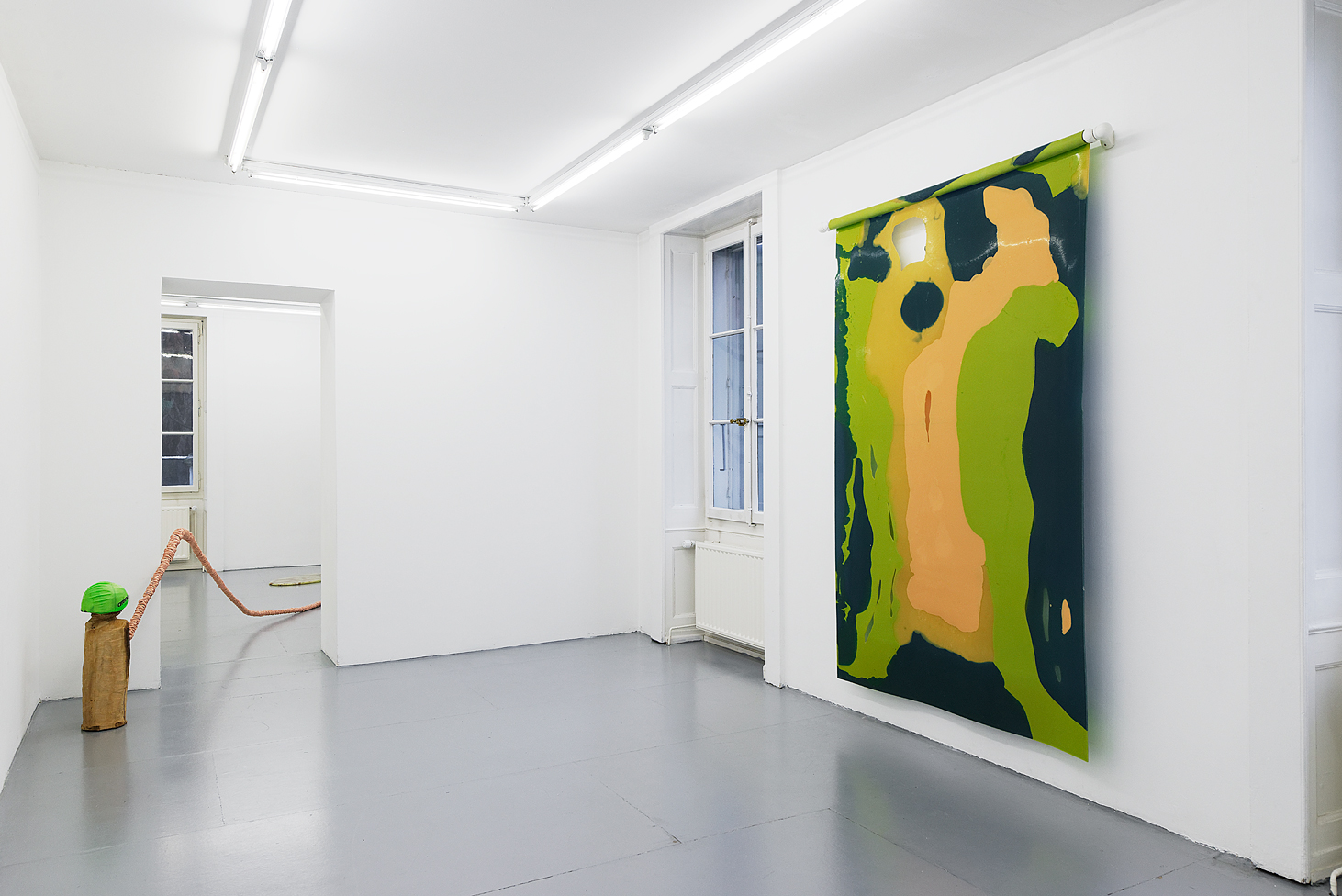 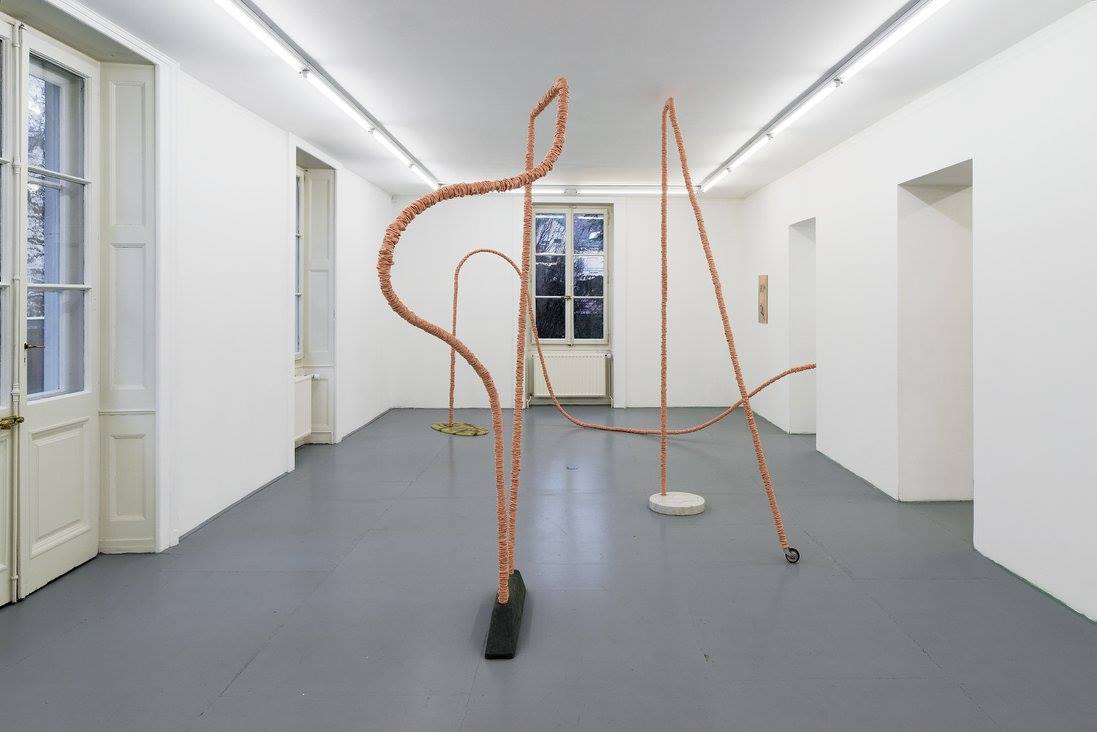 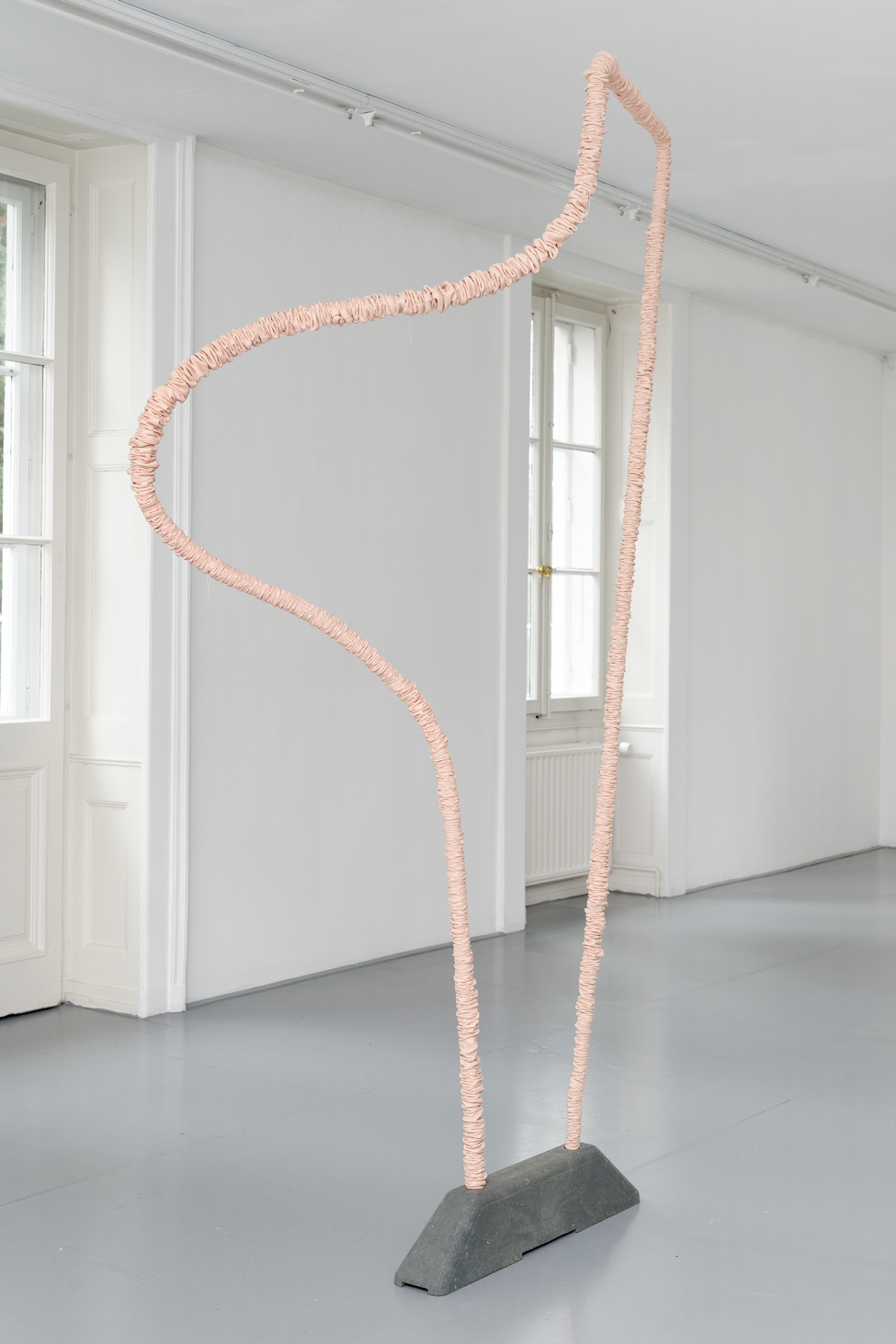 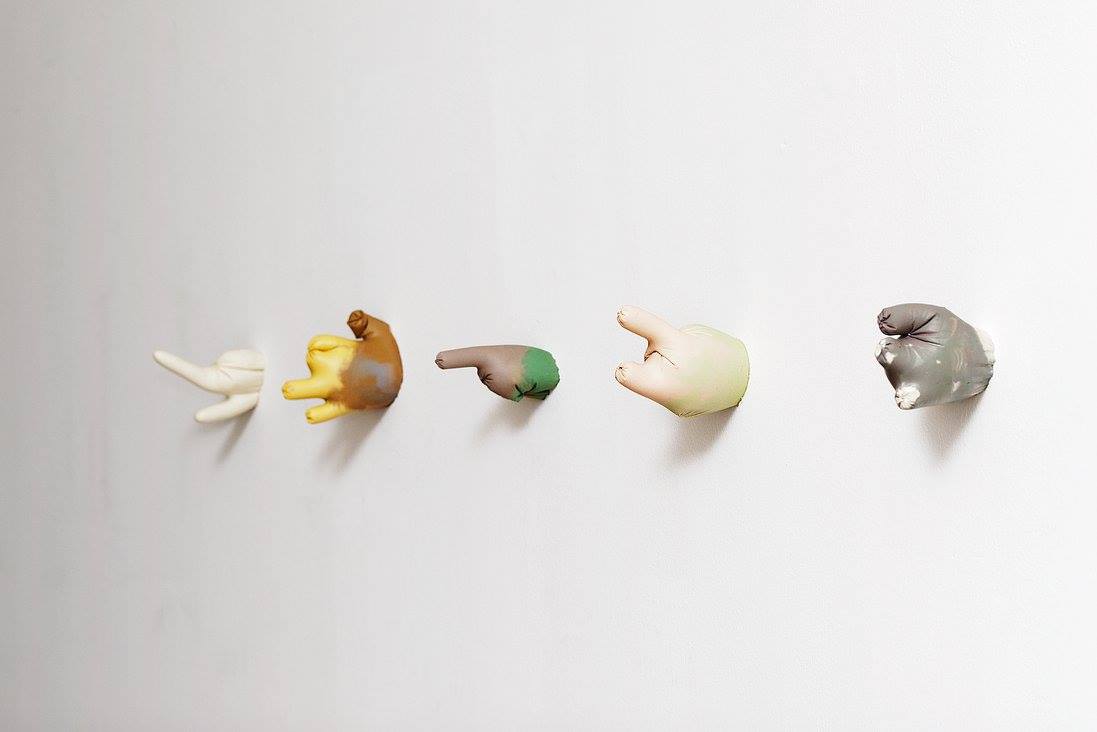 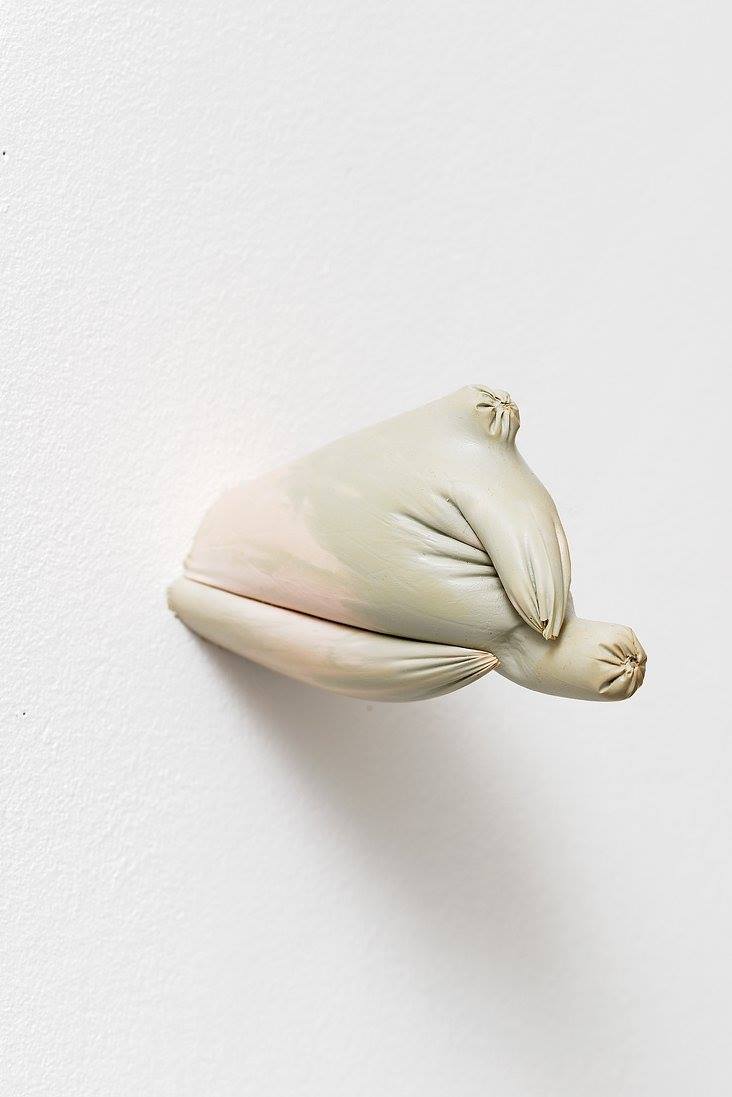 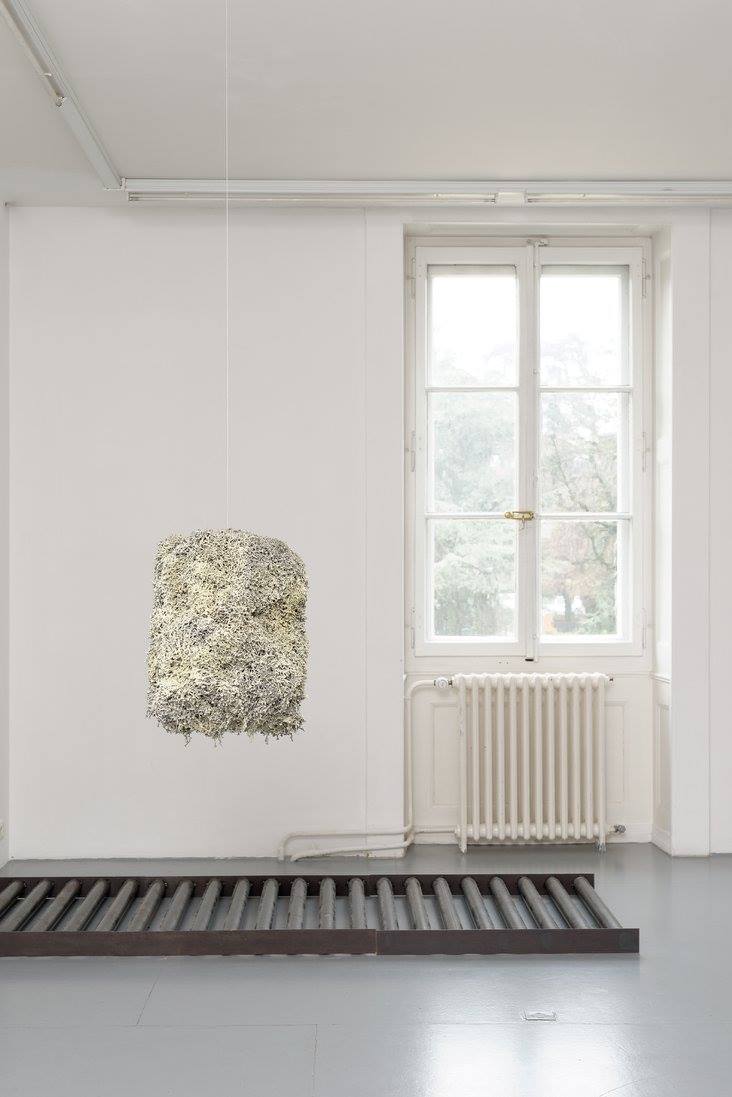 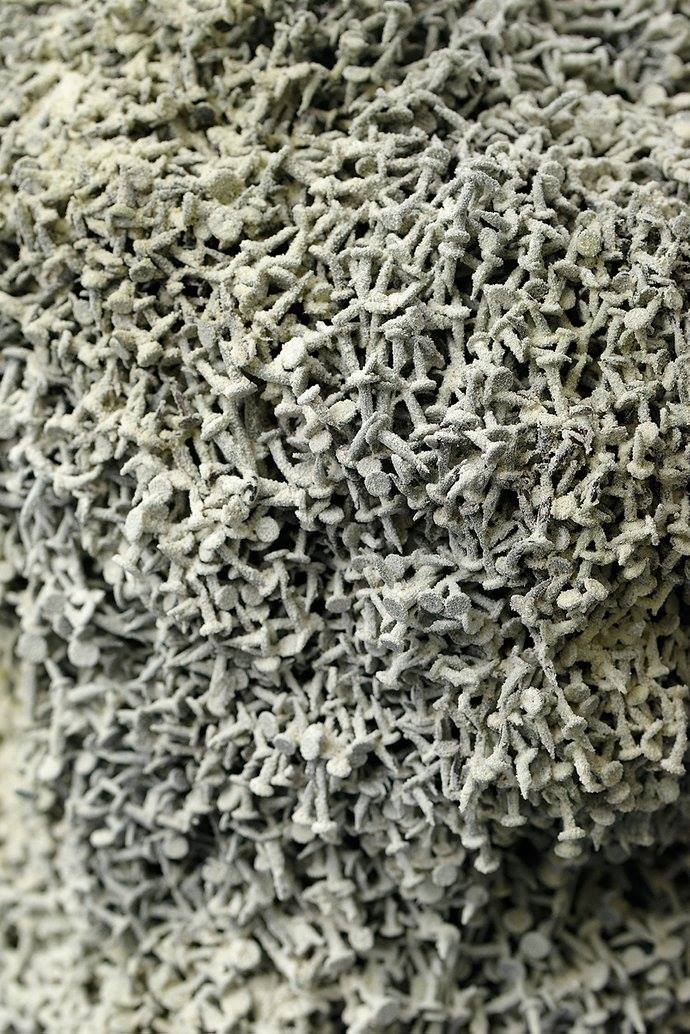 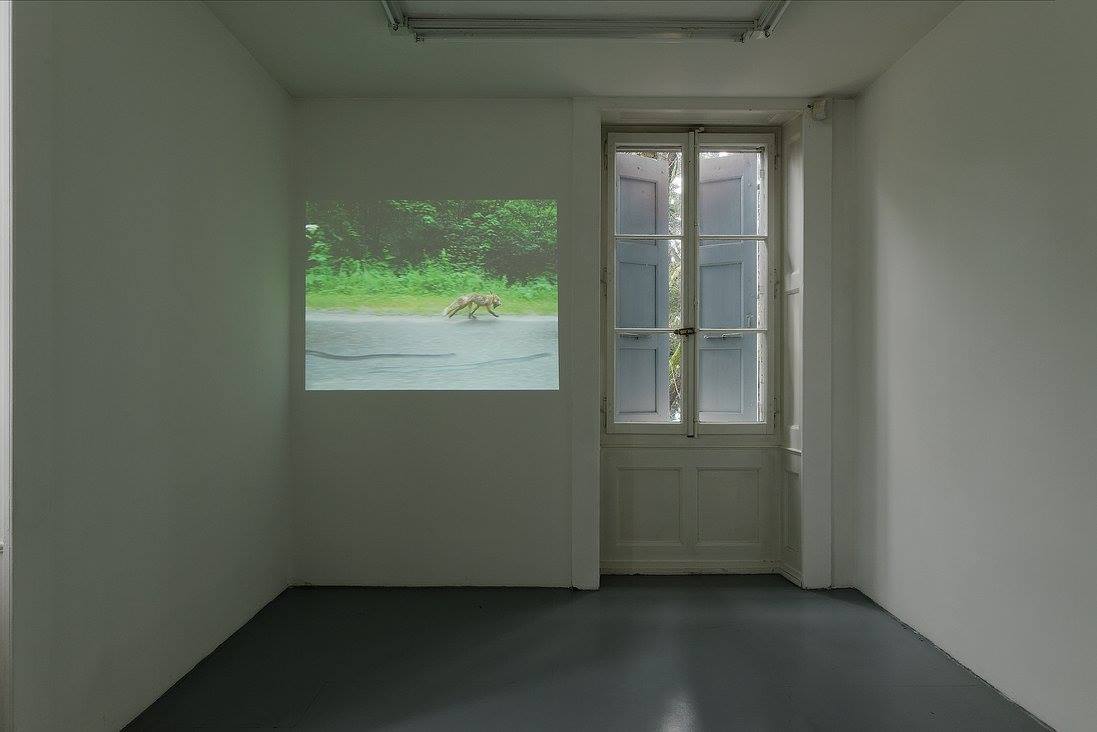 14.01–16.03.17
Saison Température locale
Text and curating : Garance Chabert
Photos : Aurélien Mole, Etienne Chosson
Share this page: Facebook • Twitter • Mail
Download: Press release • Face aux œuvres et notices d'exposition • Jeu et dossier pédagogique • Ecrit in situ par Marie-José Muller Llorca - Des images du primat de la matière •
At the Villa du Parc, we have been preparing for some time for the new piece by Nicolas Momein, a functioning artisanal soap production unit installed in the center. We have slowly been taking in and taming the terms, specificities and difficulties of the artist’s proposed work, e.g., type of vat, choice of oil, price of soda, hot and cold soap-making techniques, expertise of master soap-makers, drying methods, etc. Additional questions have naturally arisen, ones that are more familiar to an art space, such as the form of the monochrome mass of soap, the public performance of cutting the product up, and where to place the resulting sculptures.
Make way then for saponification, that chemical reaction with an esoteric name that Nicolas is going to turn into a processual work of art at the Villa du Parc. Developed over a long period by the artist, this bold project is the logical extension of a certain number of experiments with the plastic qualities of everyday materials, which began with a series of sculptures done in 2012 using bars of soap produced by Provendi ¹.Working his way back from the object to the formula for making it, Nicolas will be showing in a context that is foreign to it the manufacturing process itself, a mix of several traditional techniques from Marseille, Alep, and Naplouse that have been selected for their potential as sculpture and formal expressiveness. The transformation of the raw material will be visible in two stages, from the pouring out of the newly made soap on the gallery floor during the show’s opening, to the drying of the cut and stacked bars of soap during the rest of the exhibition.
Could his appropriating of production techniques hold the key step that will allow the artist to know his material and eventually be able to separate it from its use ? Something on the order of the “trade secret,” ² or the “soul of objects” ³ as we have read here and there ? Surely there is something that plays out in the meeting of gesture and raw material, that know-how of the craftsman or engineer which molds and structures the form of the object. Its design or ergonomics, in a language we would like to be metaphysical or materialist, the choice is up to the viewer.
Around the installation, which for now we see as fairly raw and totemic, Nicolas deploys a set of related sculptures, from the great family of buffer materials, protective, reassuring, conservative things – soap, rubber, horsehair, rubberized table pad, etc. The sculptor snaps up these haptic substances, most of which are elastic, or easy to handle, or something to accumulate, and were invented to protect our skin, houses, or wooden tables. Raised up to the level of unproductive sculpture, they display novel, charming forms.

As for the title, after an intense brainstorming that plucked apart a range of possible names – painless sculptures, soft arm frissons, hot or cold head, bras mou tête chaude (rougher), dans l’écume, etc. – Nicolas pulled up short at the image of a tall hair bun atop a head and therefore chose “TopKnots.” I admit, we were not totally convinced. But when all is said and done, I like it. For me the title conjures up in no particular order a toy making a tinkling sound, a pin in the mouth freeing up fingers to coil locks of hair, an overheated bathroom, even the shrill cries of a grandmother, “Stop tearing out each other’s hair or I’ll give you such a whupping !” If he tosses in somewhere a stretched bath towel, an invasive rubber table pad, and the old leather of an easy chair, it might indeed be possible, in rediscovering these overlooked secondary materials, for you, too, to recapture certain shivers of delight, no?

Topknots show enjoyed the support of Fonds Cantonal d’Art Contemporain in Geneva and Provendi in Bons-en-Chablais.

He was initially interested in the rotary blocks of soap that hang over sinks in schools, that yellow vintage-looking oval that is immediately recognizable in France. He displayed them in a line, the upper part intact and the lower one worn down by a legion of little hands, objects catapulted into a history of sculpture both ready-made and modeled. With Provendi, the company that produces these cakes of soap, he next created, working with Corinne Louvet, a special soap collection that was pressed at the factory, changing the scale, shape, and texture of this cult object. The artist was thus able to tame the material and the possibilities of transformation that he can impose on it.

Nicolas Momein
Born in 1980 in Saint-Etienne, Nicolas Momein studied art at ESAD in Saint-Etienne and later HEAD in Geneva. Since 2012 he has been invited to put together several solo shows of his work at a number of institutions in France, both public (the art centers of La Galerie de Noisy-le-Sec in 2013, Les Eglises in Chelles in 2015, Micro-Onde in Vélizy-Villacoublay in 2016) and private (the White Project, Bernard Ceysson, and Tator galleries). He has also taken part in a number of group shows in France and Europe since 2010, including the IAC of Villeurbanne, Le Magasin in Grenoble, the Académie Royale des Beaux-Arts in Brussels, and Art Contemporary Center in Geneva.
He is currently represented by Bernard Ceysson Gallery.
nicolasmomein.com 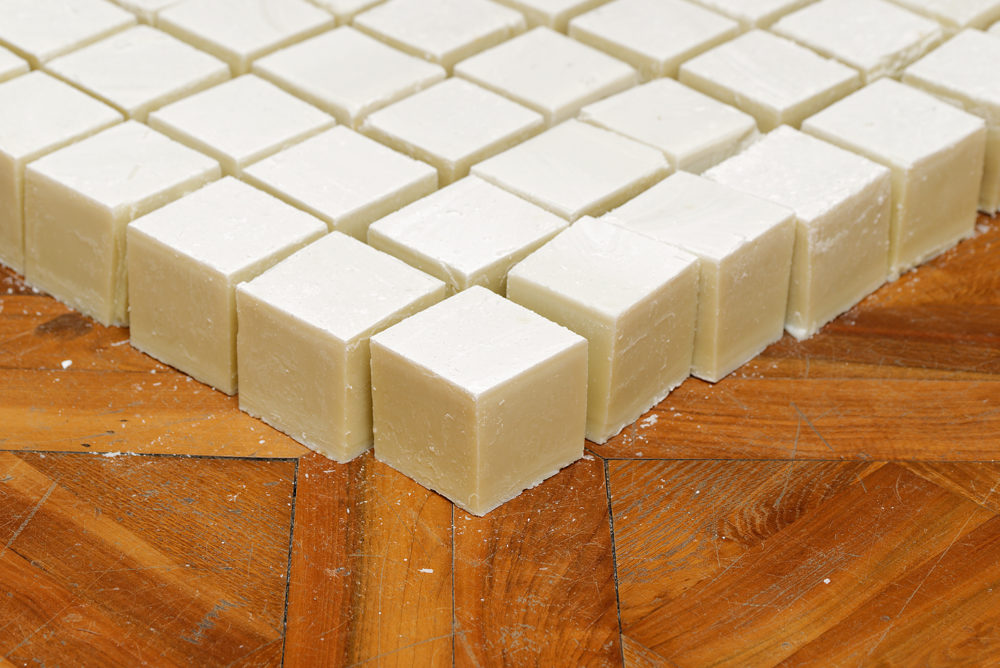