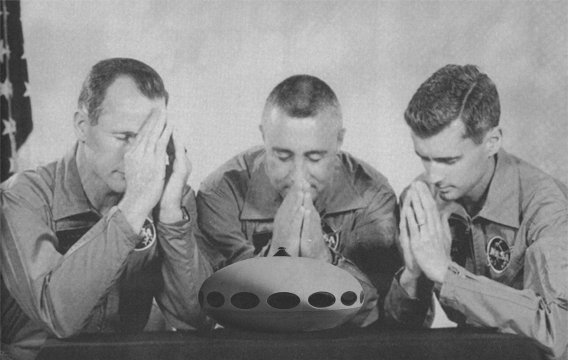 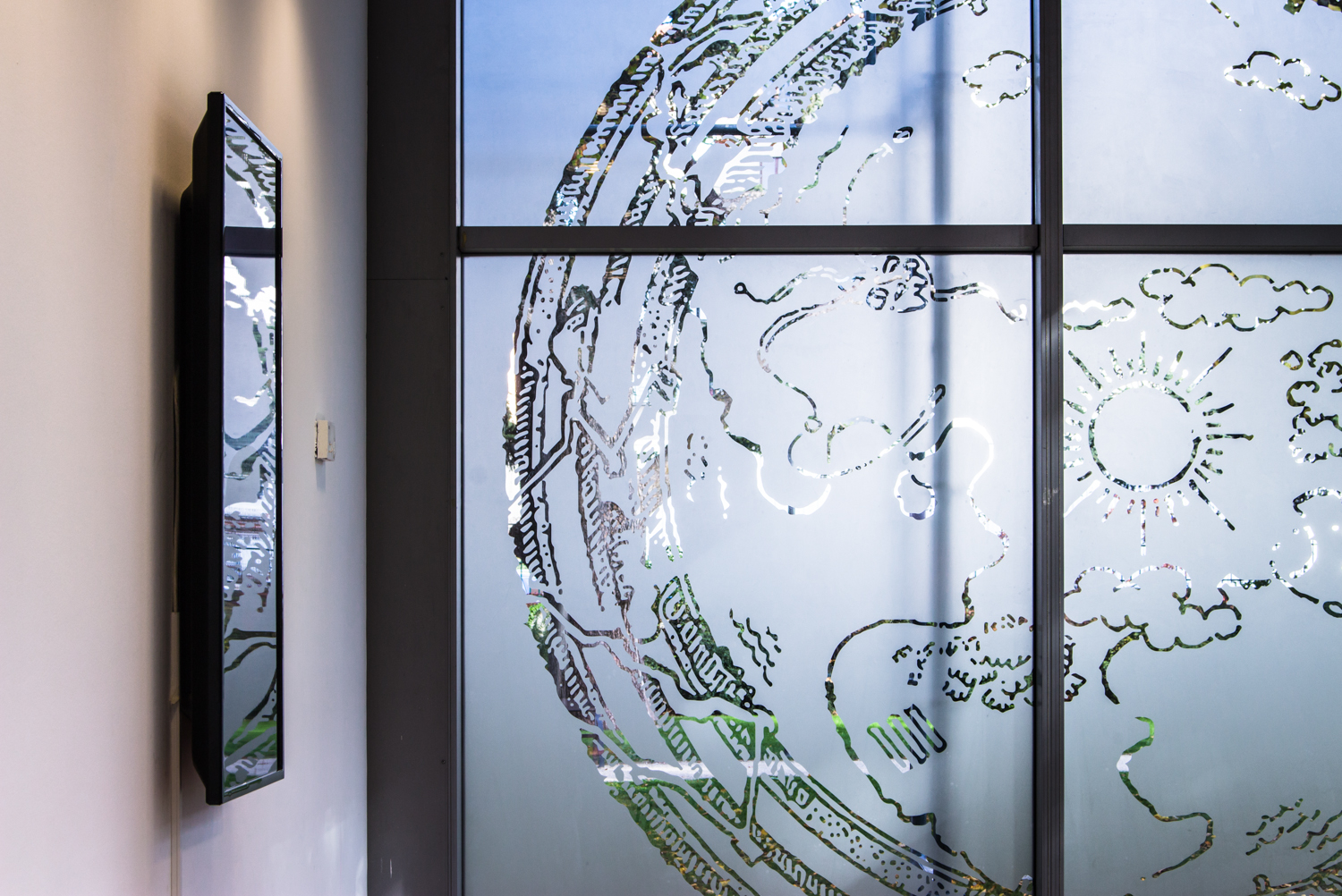 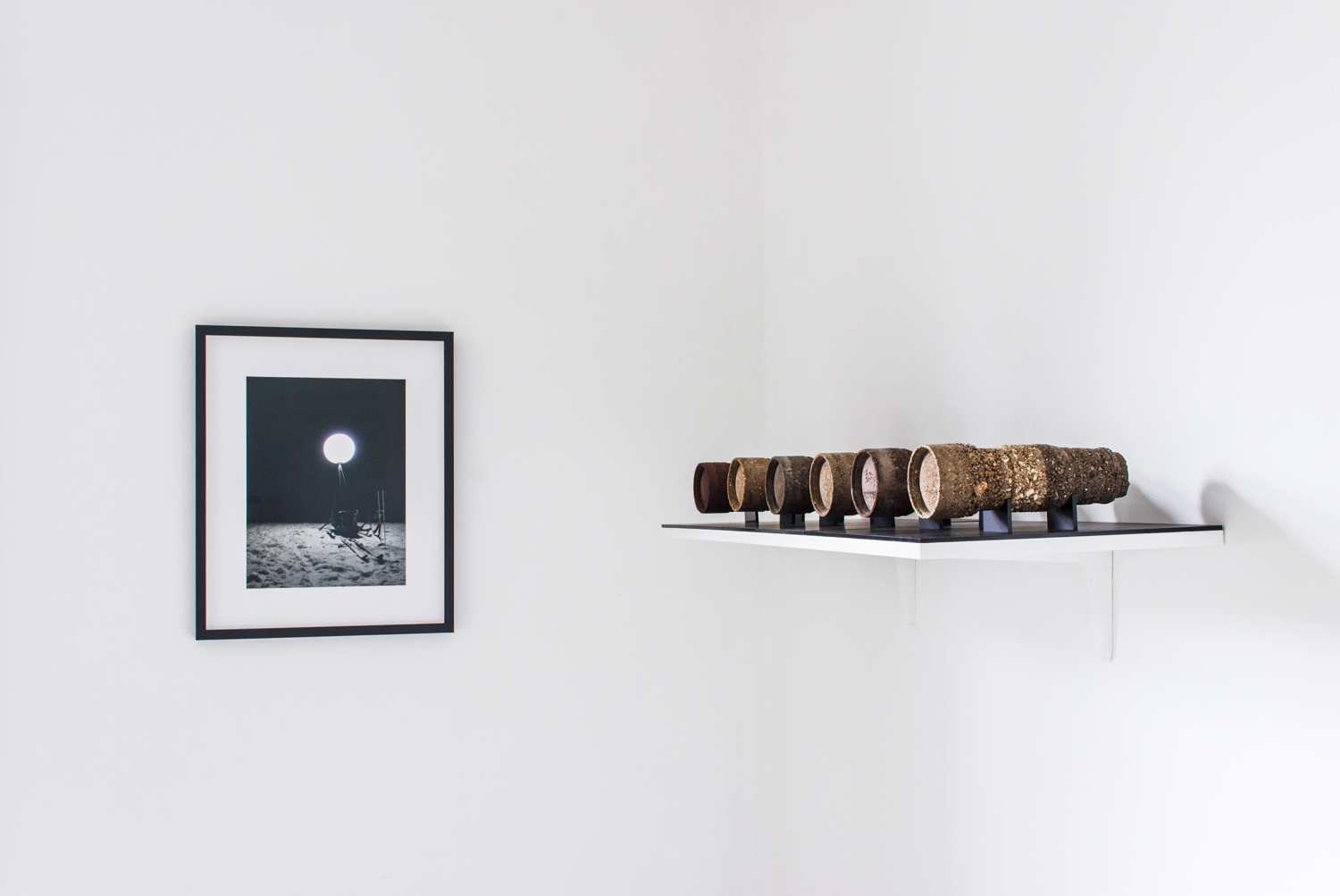 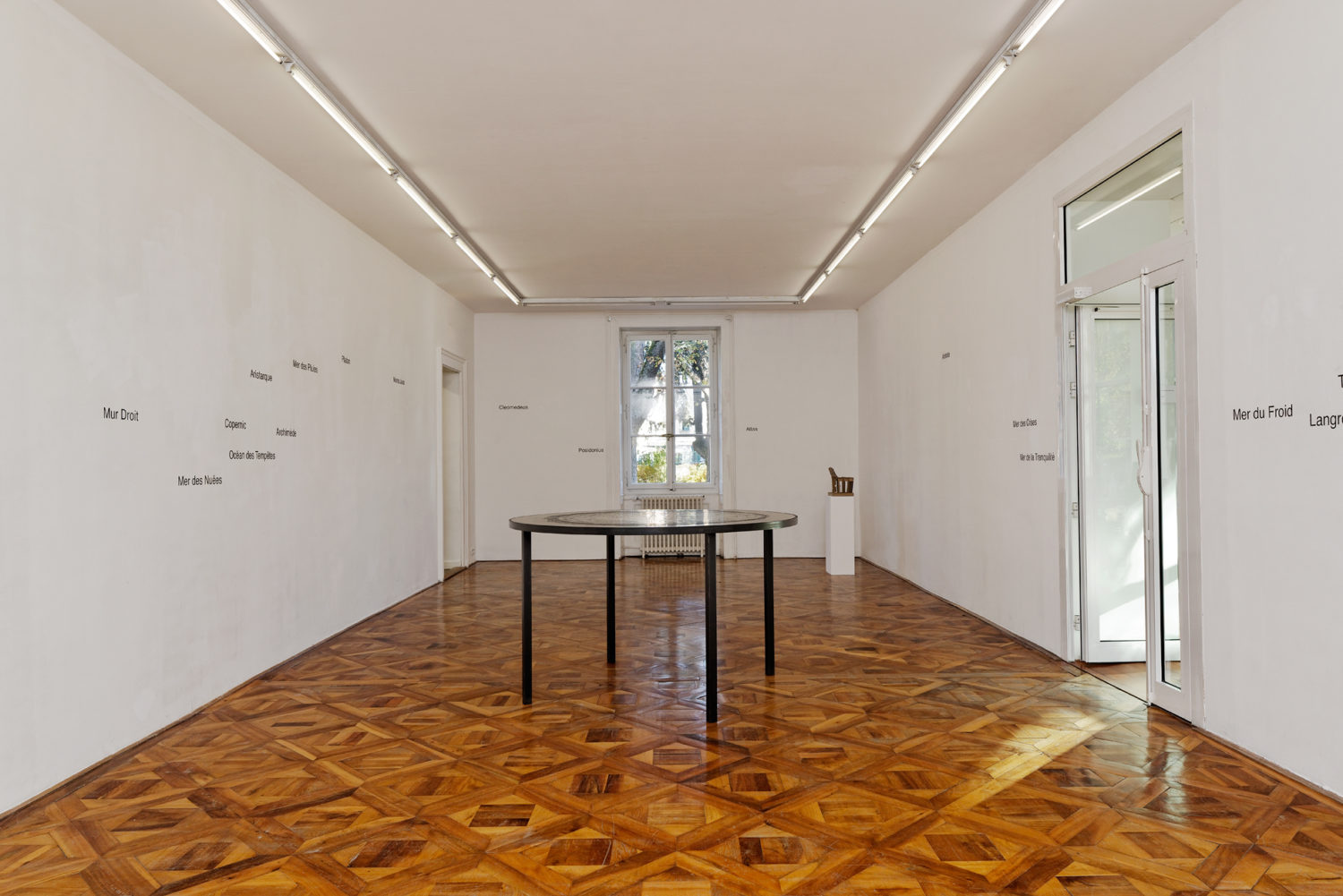 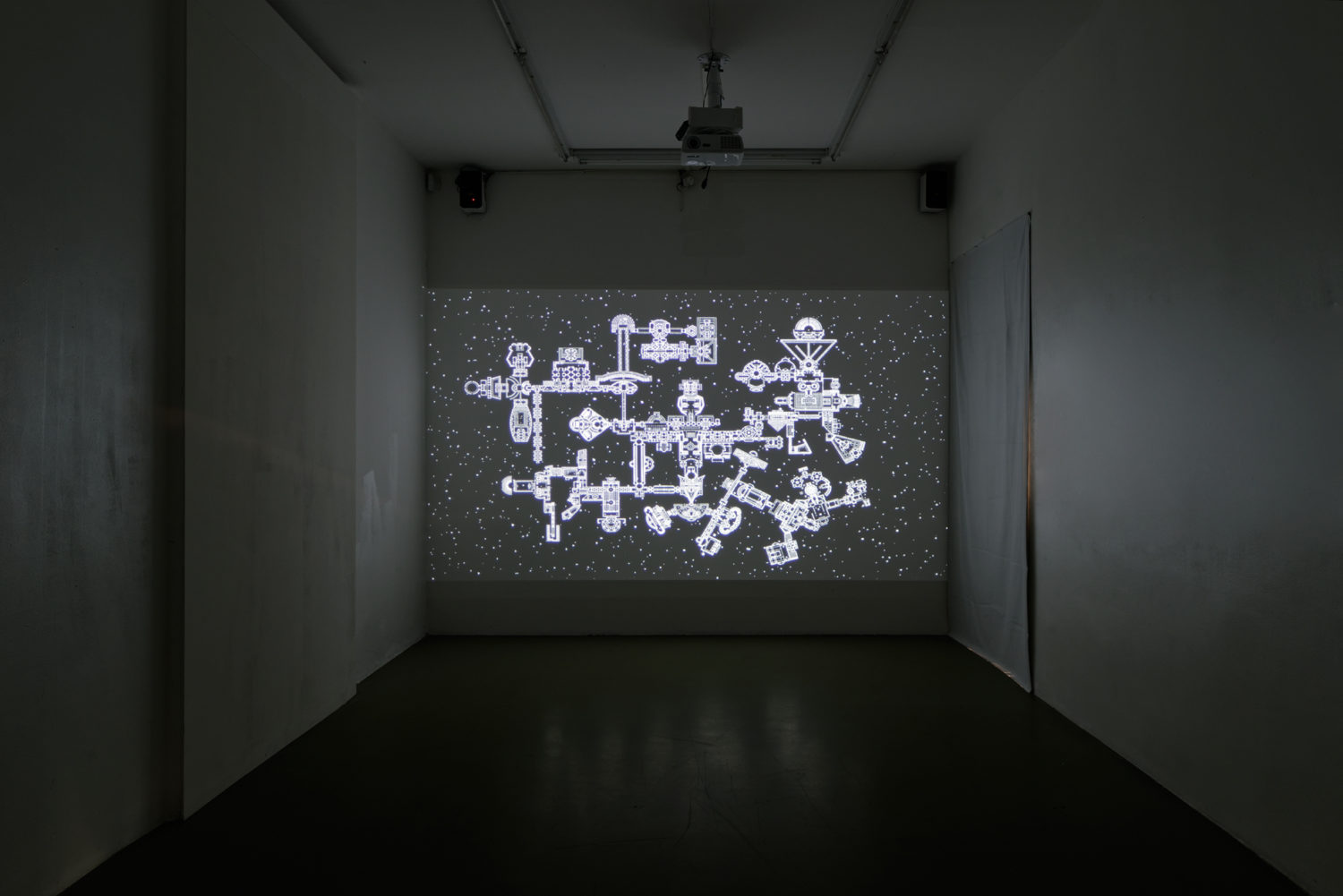 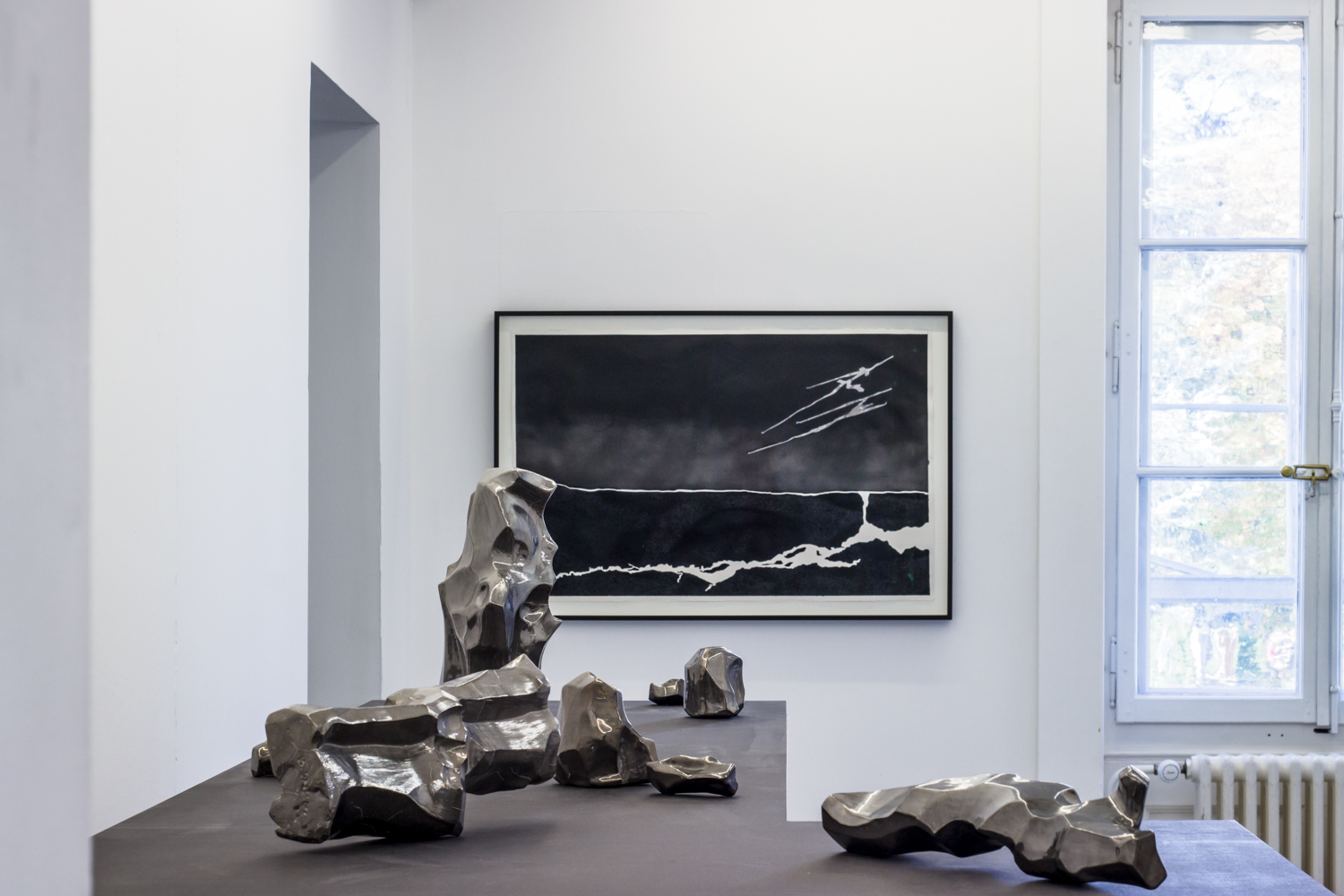 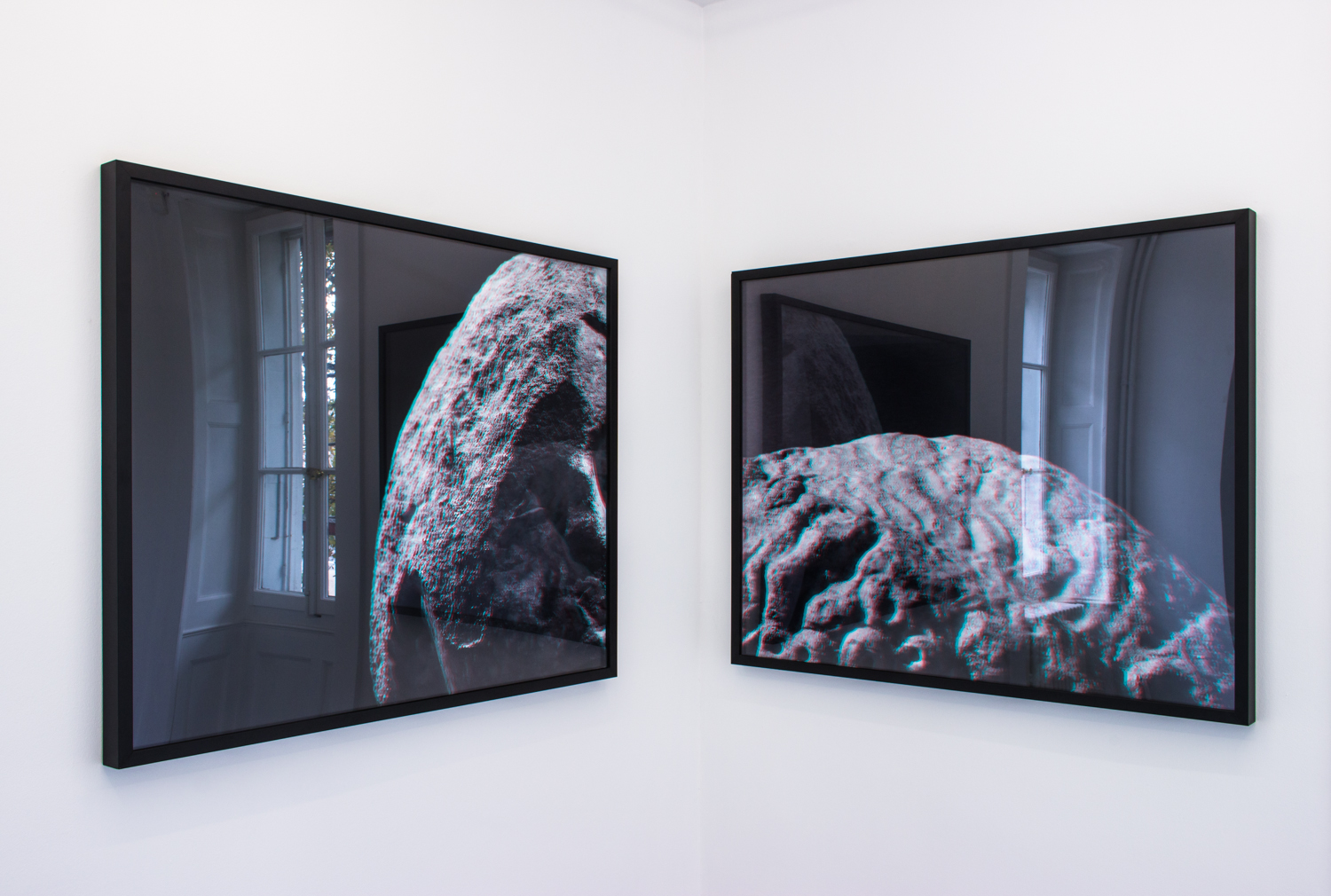 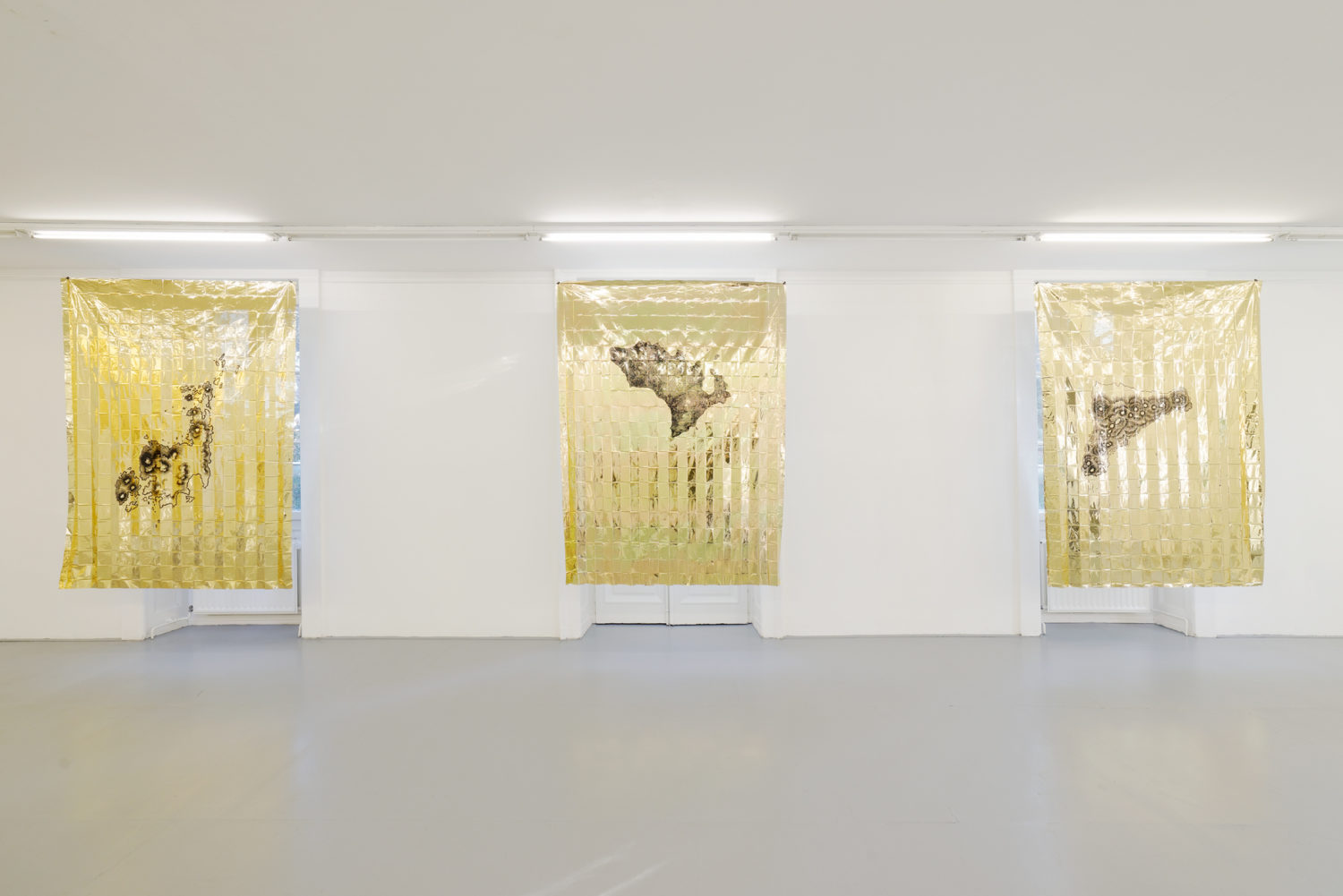 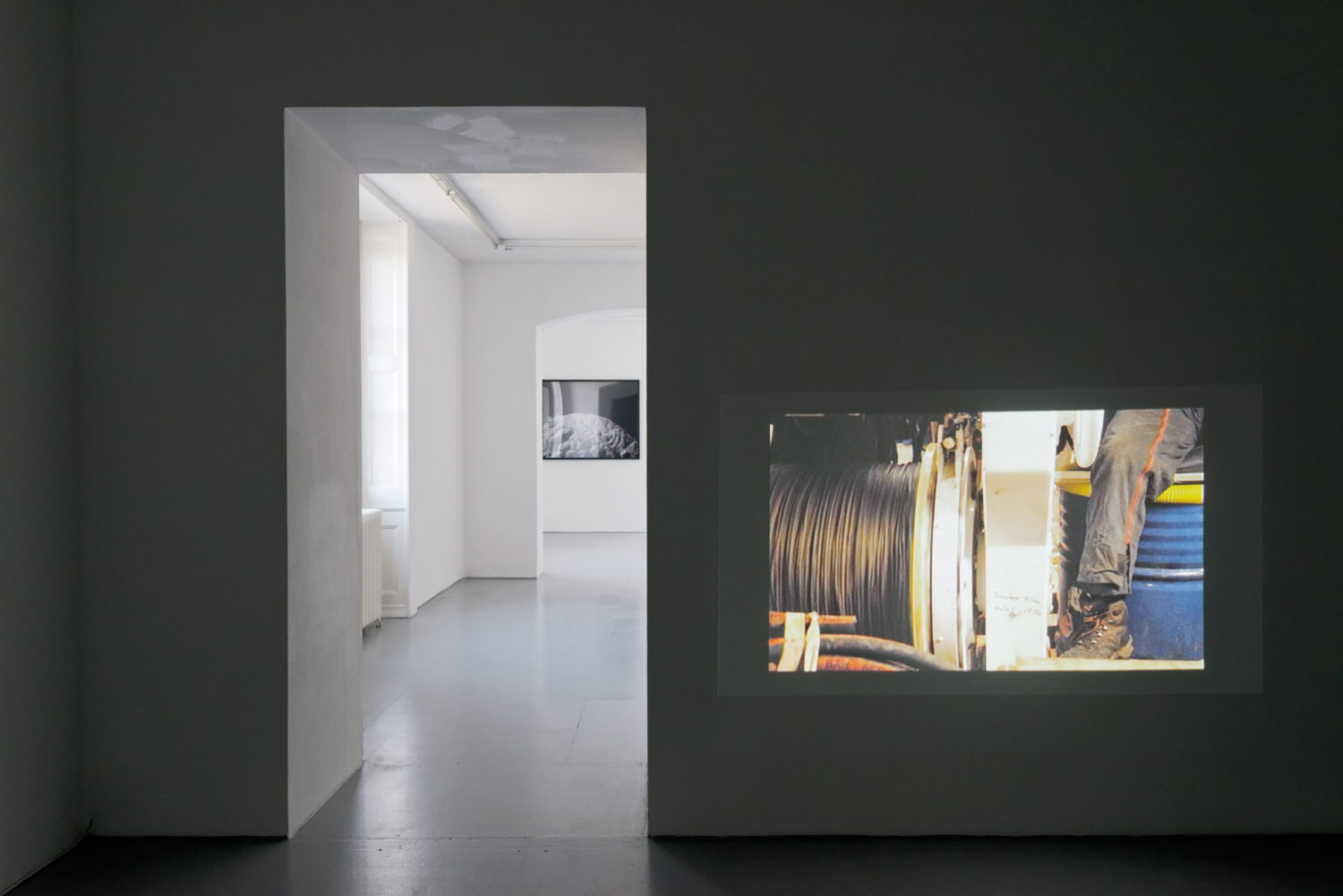 Ellie Gae, The Yo-Yo lecture, Probalities, A hole to see the Ocean through, Map of the World #6
Au fond: Marion Tampon-Lajarriette, Metamorphic Rocks, 2013

After a full-bodied plunge into iconography, the Villa du Parc shifts the cursor a bit, this time towards “fiction,” by honoring artists who work from documentary sources, interpreting them from a new and different angle, and inserting them in parallel narratives.

Certain disciplines, like history and science, produce numerous hypotheses from an analysis of material data. Depending on the technological but also the ideological state of their day and age, these theories evolve and are enriched over time; some become dominant and lead the way to decisive scientific developments (the Copernican Revolution, Relativity Theory, etc.), while the earlier ones feed into a history of knowledge made up of experiments, errors and beliefs. In written and filmed science fiction, the facts and theories touching on our present environment–whatever their degree of credibility—give rise to often global projections into the future. Contemporary artists also seize on these available objects and information, but look at them differently, focusing on details and fragments. Through means that are specific to the visual arts (drawing, collage, video, sculpture, etc.), they bestow a new destination on things (objects, documents, images) that are already mobilized in another field of knowledge. They track the context of their appearance and the history of their discovery, dwell on their oddness, imagine their obsolescence or the force they can muster to resist disappearing, borrowing and adapting to their project the tools of the archeologist and the researcher.
Les Traversées is interested in the fictive and imaginary potential of the last terrae incognitae, last unknown lands – notably the far North, the Moon, and space. The show is designed around the work of Benoît Billotte, a Geneva-based French artist who has gathered around him eight other artists whose work offers a dialog with his own all throughout the Villa du Parc show.
Far-off territories that are hard to reach are spaces that are favorable to scientific and literary projections. They even lend themselves fairly well to a combination of the two. That is, the difficulty of the observational conditions generates multiple errors of interpretation, each discovery engenders its share of hypotheses and fantasies, and every expedition is an adventure tale. To comprehend these lands, scientists, scholars, and researchers equip themselves with tools that are more or less accurate and rational. It is around that culture of exploration—its objects, methods, archives—that the show is built. On the one hand, Benoît Billotte dreams up works of art of all kinds and sizes from geographical and architectural documents that he subjects to formal updates. The often partial or combined transposition of these sources significantly modifies our perception of them, along with the attention paid to the materials and their installation in the venue. Cartography is often used since it proposes a representation of a land through abstract data (network of lines, symbols, names). The slightest deviation or shift makes it possible to emphasize the fragility of these norms and reference points as well as their importance in our way of depicting the world. The perception of the three new geographic pieces that Billotte has come up with for Les Traversées wavers between recognition of familiar elements (outlines of islands, moon craters, flags and pennons) and the difficulty of assigning them a location or even a function (the maps lead us astray more than they inform us).

All around the exhibition, works by French, Swiss and international artists of Billotte’s generation selected and arranged by him serve as fictional extensions and parallel propositions for both comprehending and entering these possible territories of exploration. Luc Mattenberger, for instance, depicts himself in desert landscapes, confronting them with adequate gear and repetitive and apparently aimless actions. Meanwhile Ellie Ga left for the far North to document a scientific expedition in 2007 during which the ship she and the scientific team were sailing on became ice bound, rendering the length of the trip uncertain and the question of prediction an obsession. Bettina Samson likes to look at and seize objects or materials that lie at the intersection of different narratives and meanings. In her sculpture series “L’éclat,” the artist observes and reproduces fragments of irridium, a metal that is nearly absent from the earth’s surface but makes it possible to trace a certain number of natural disasters like the disappearance of the dinosaurs or the dramatic impact of a large meteorite in the Siberian taiga. Conversely Marion Tampon-Lajariette is interested in very earthy artifacts, ancient sculptures photographed close up and reworked with red-green filters; they seem to emerge from the surface of the moon. Julien Discrit accumulates memory cards of cities he has lived in like Paris or Los Angeles through maps inspired by Micronesian navigation in the middle of the Pacific. And to continue with tools, Harold Guerin exhumes telephoto lenses made up of layers of landscapes, as if the recorded image had ended up showing its solidarity with the camera. Finally, Lena Amuat and Zoé Meyer screen in space incomplete mathematical forms, which begin to look like extraterrestrial, psychedelic, or psychic objects, another possible approach to the unknown that surfaces in many of the featured works.