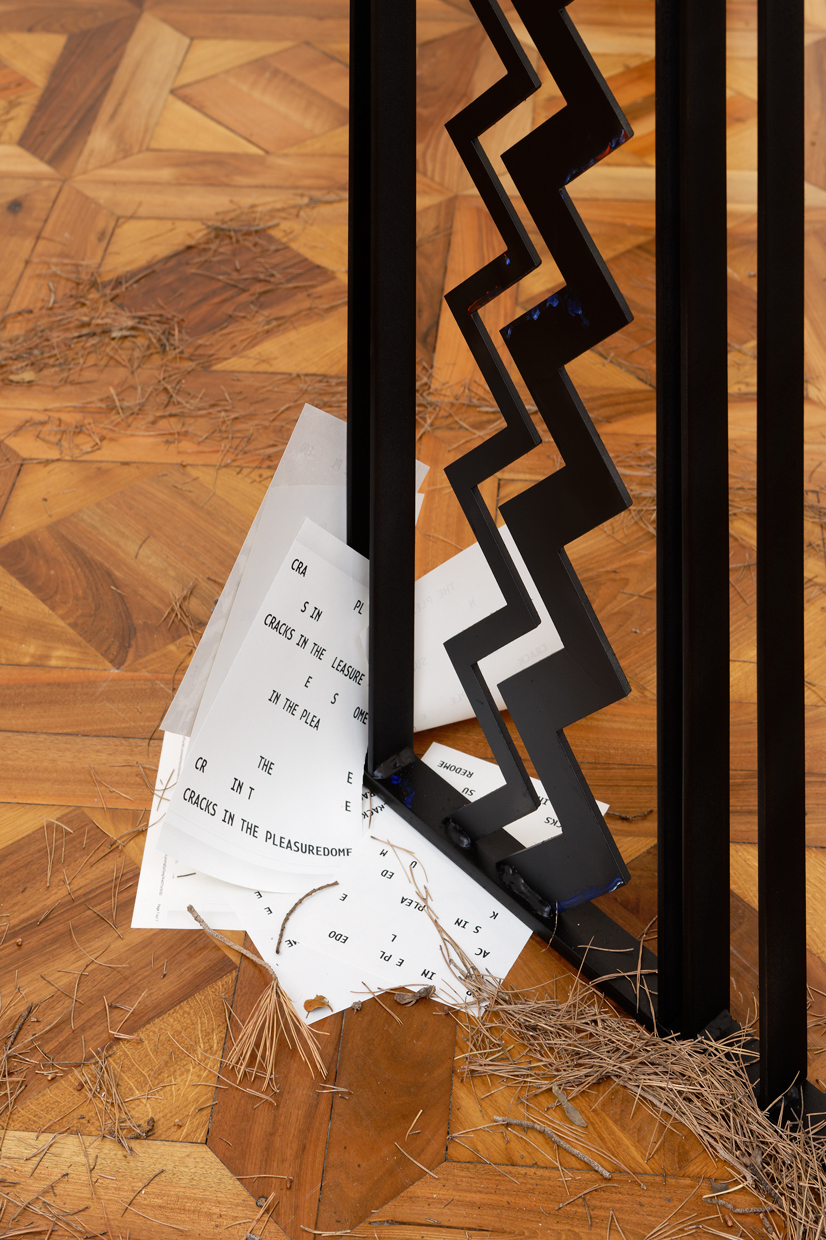 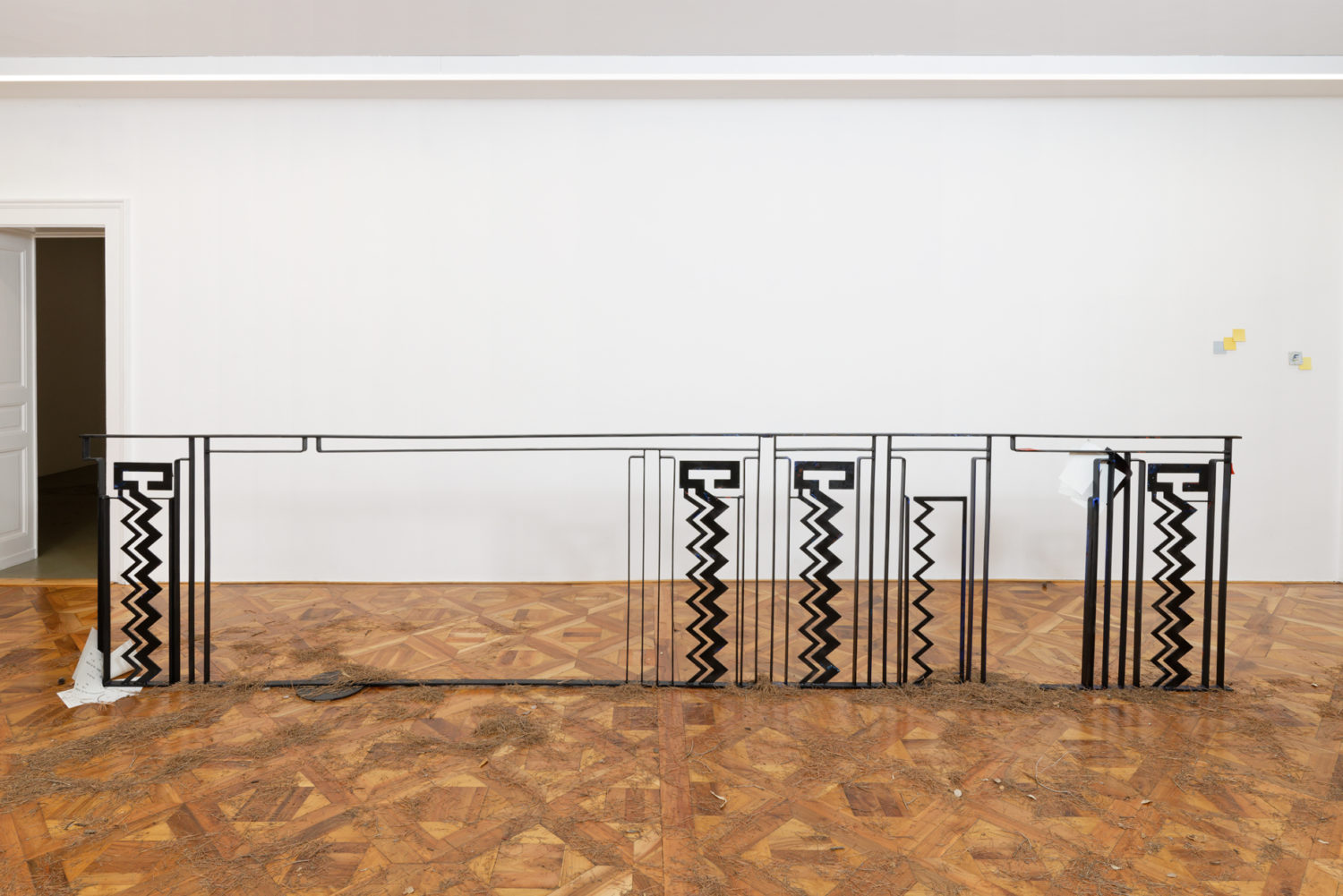 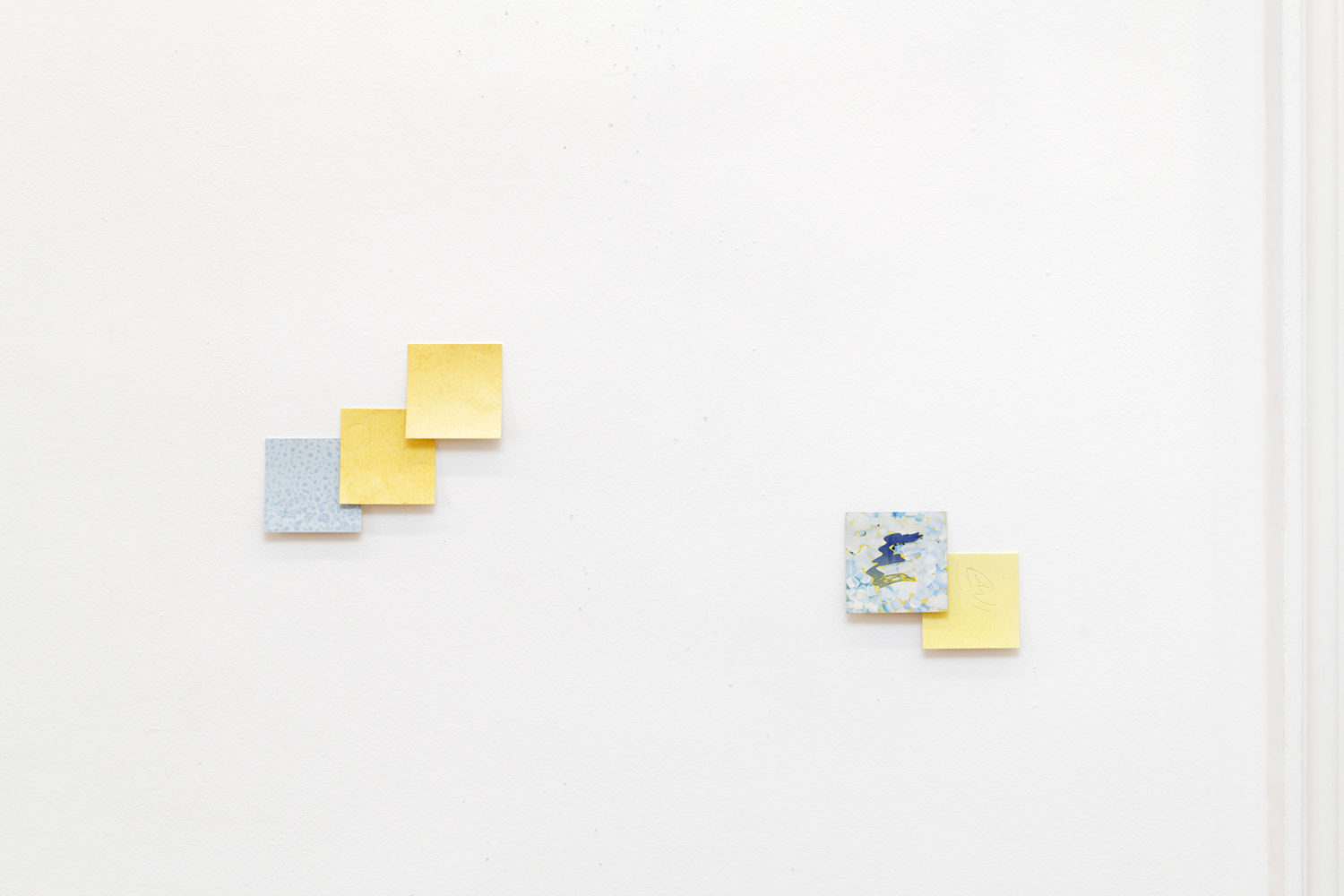 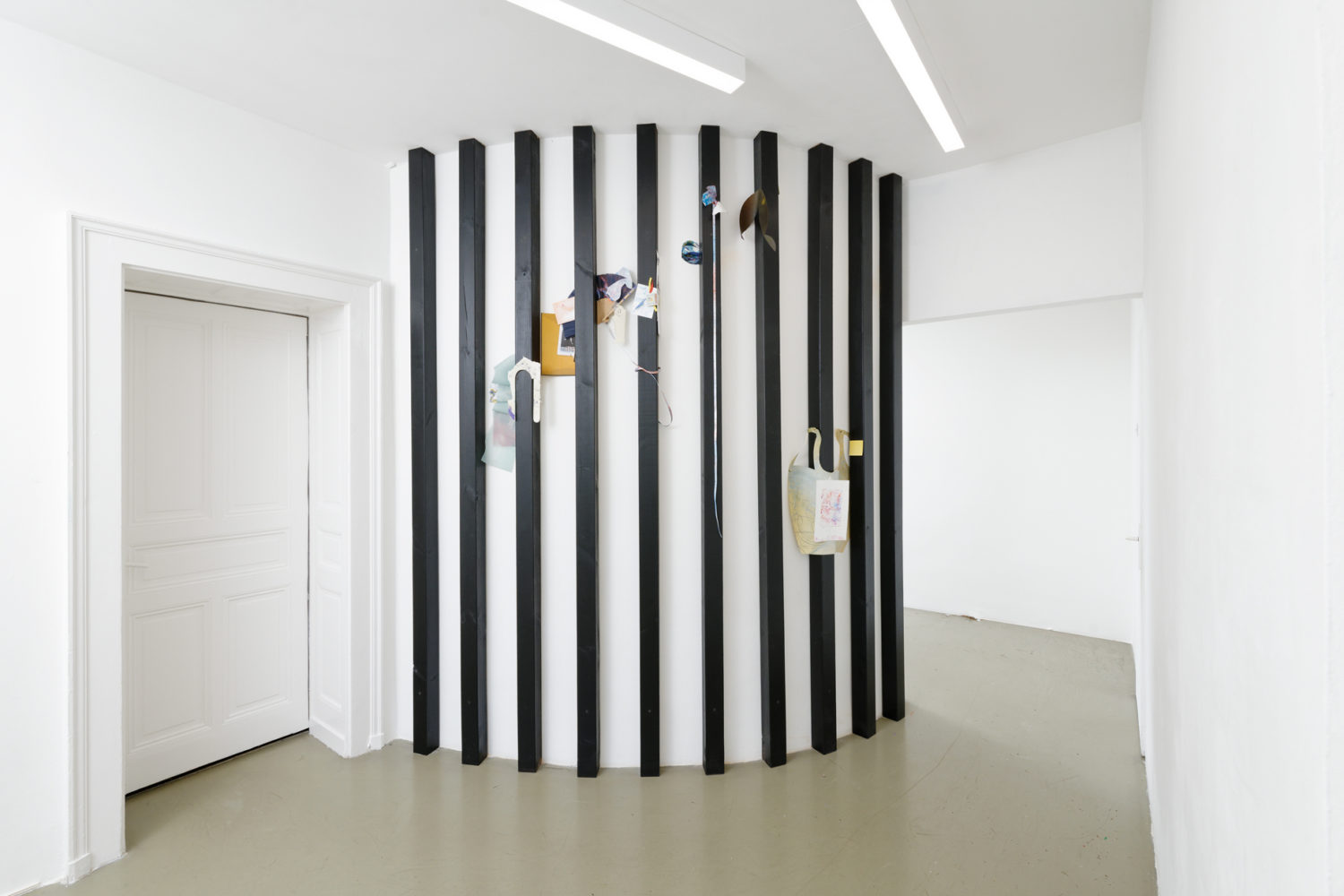 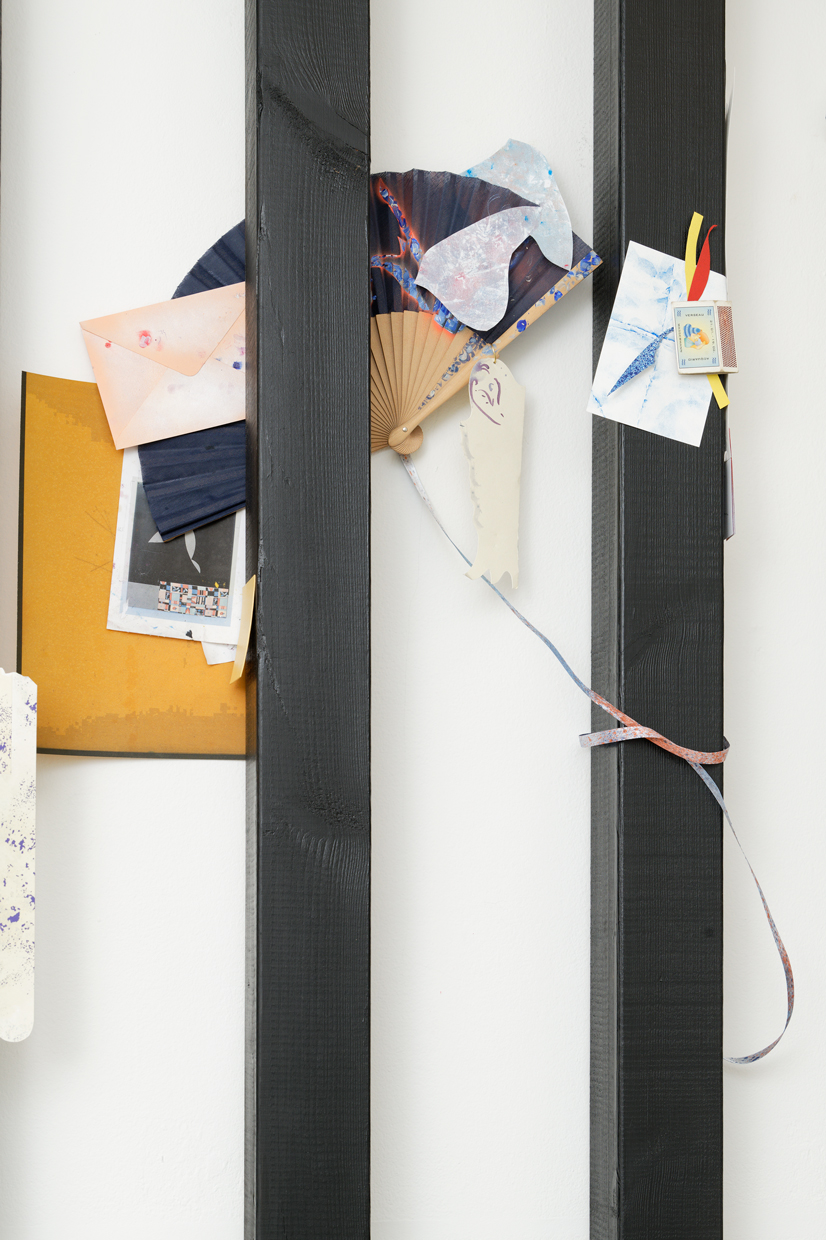 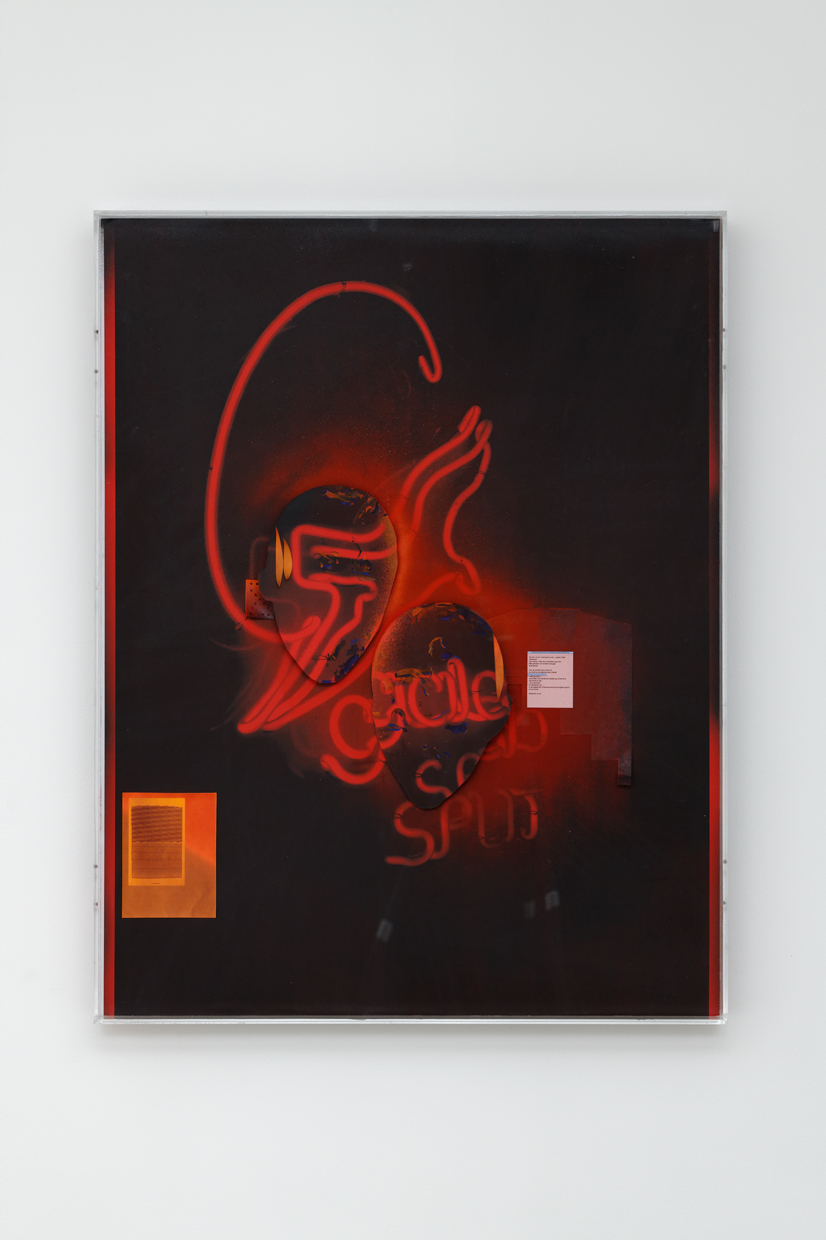 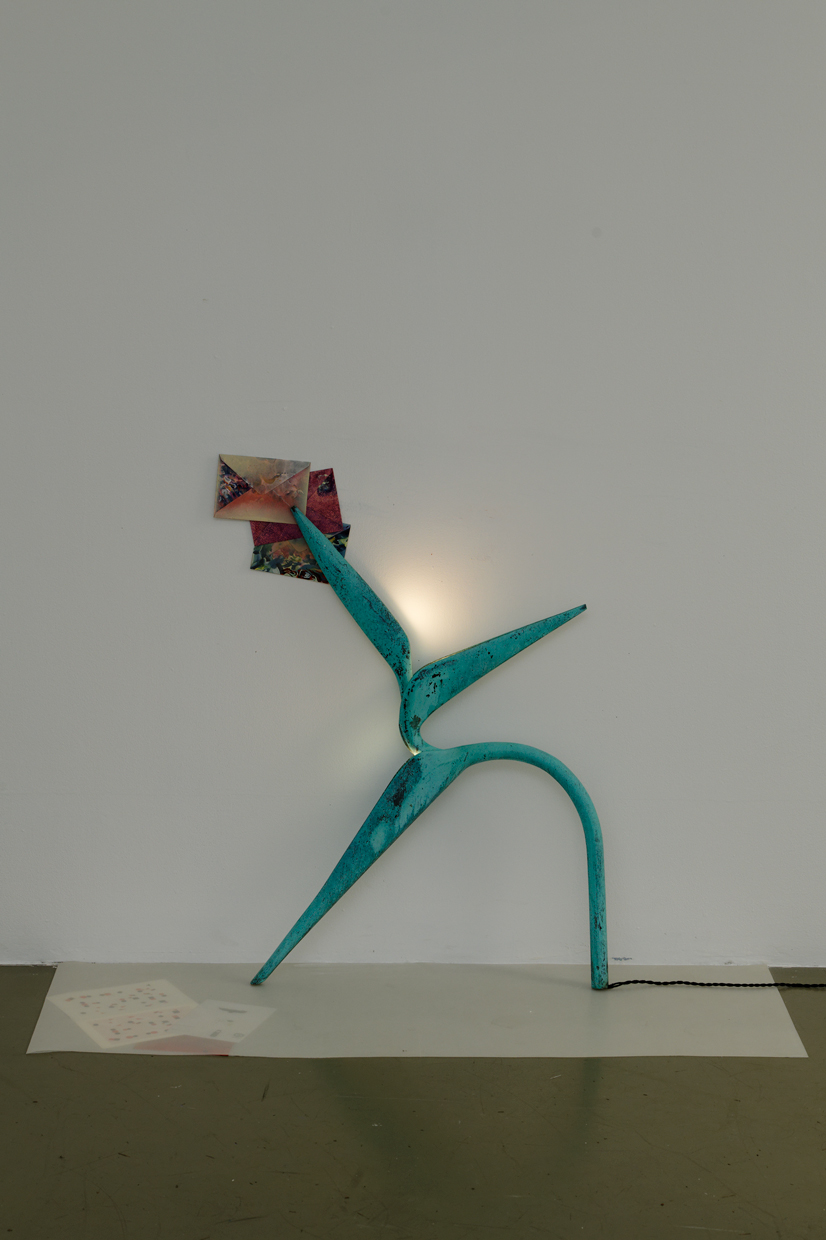 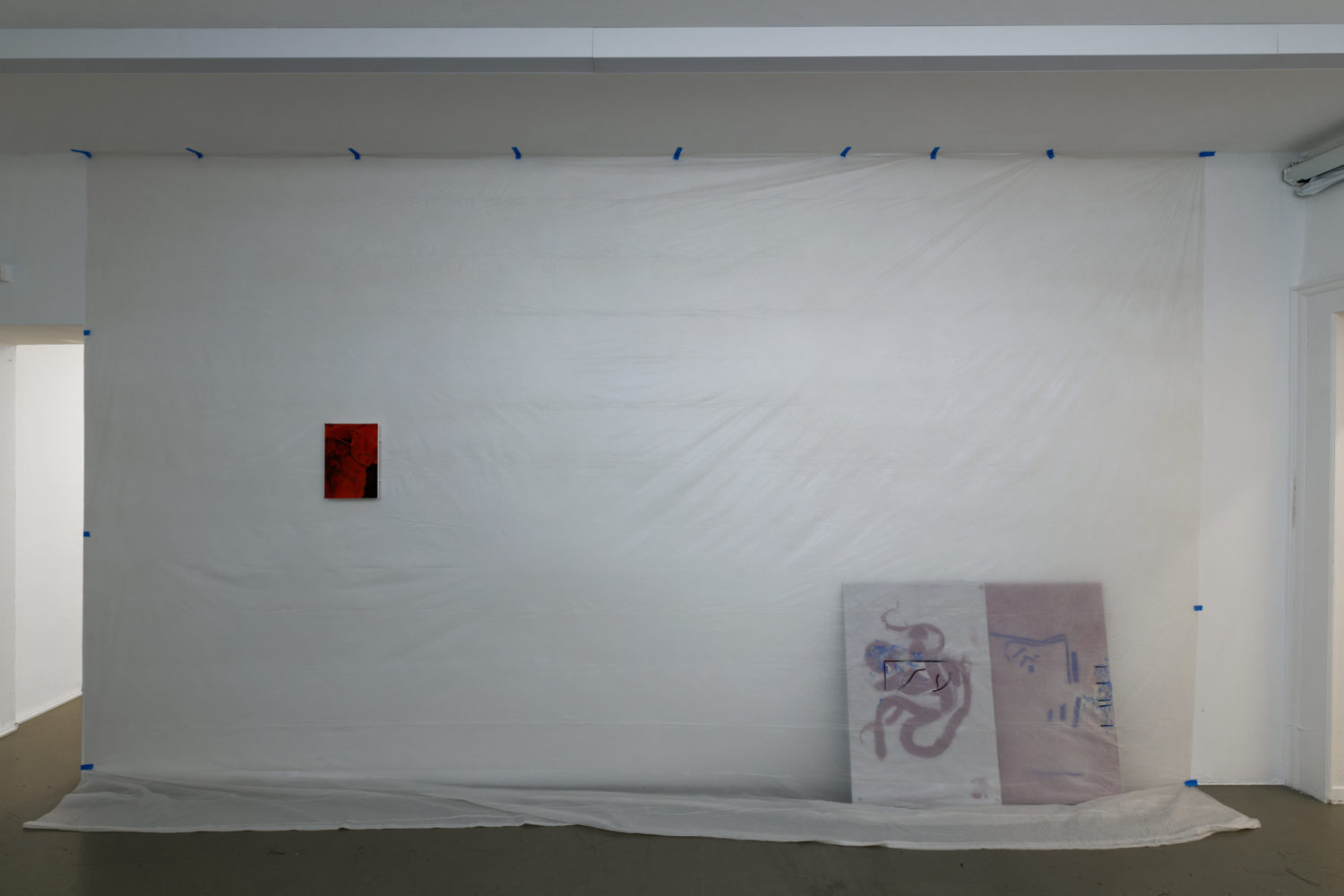 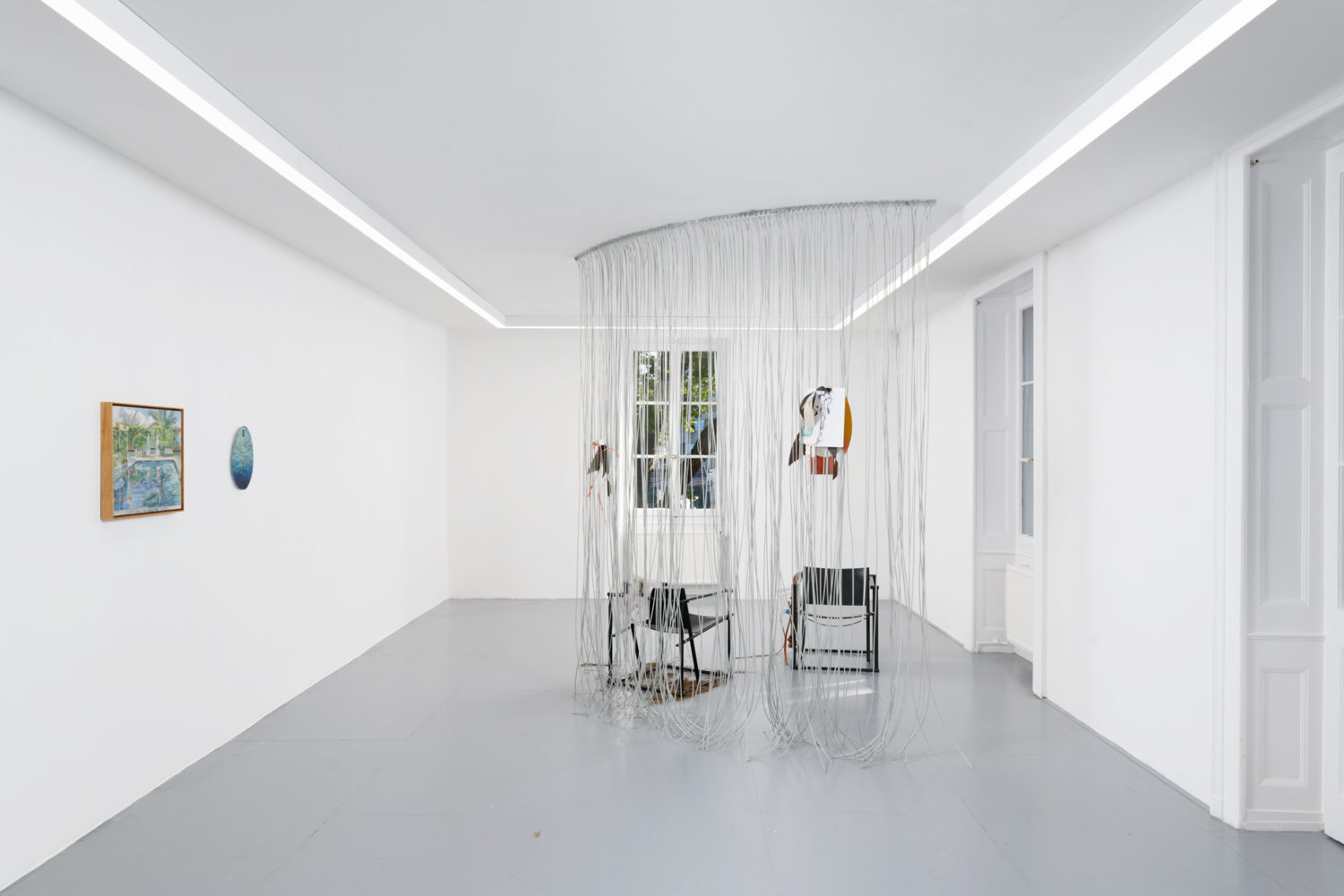 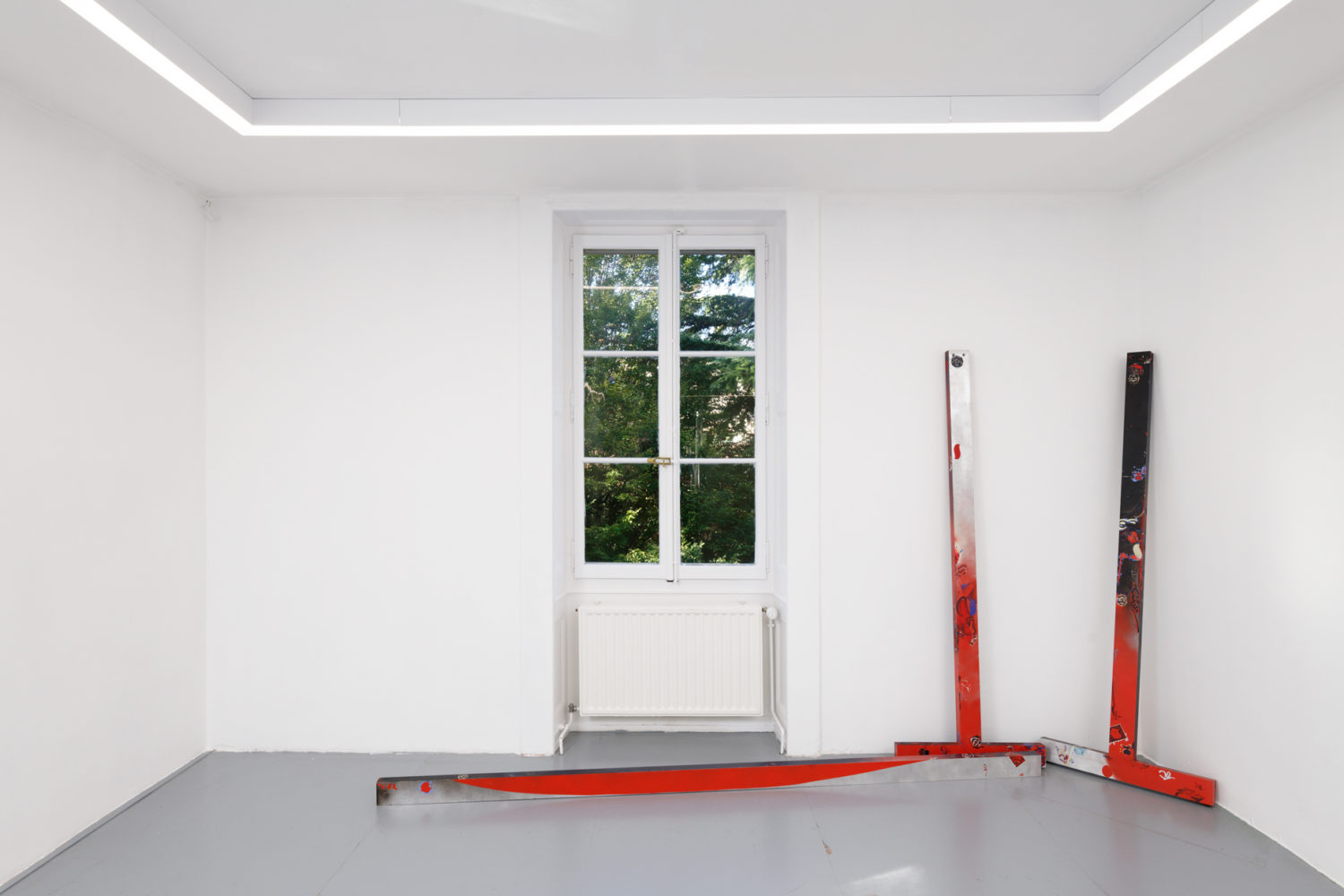 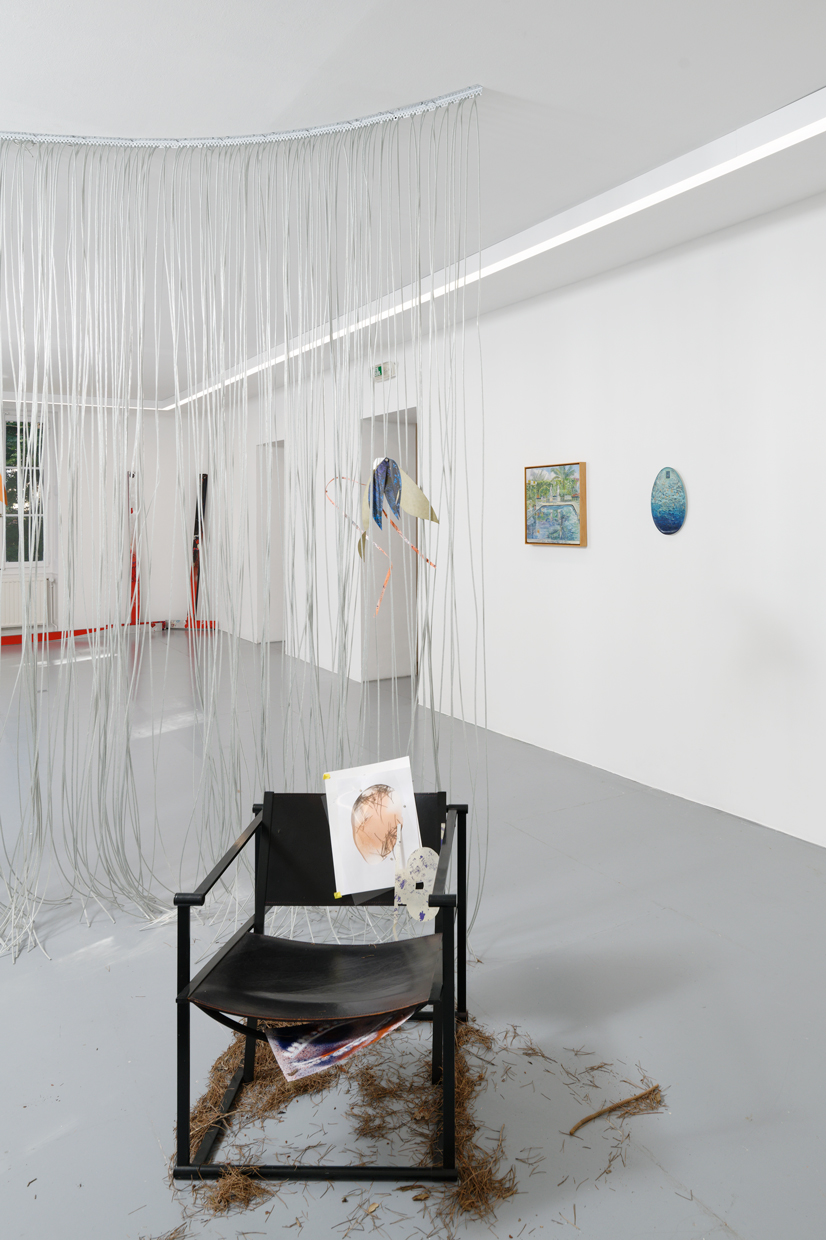 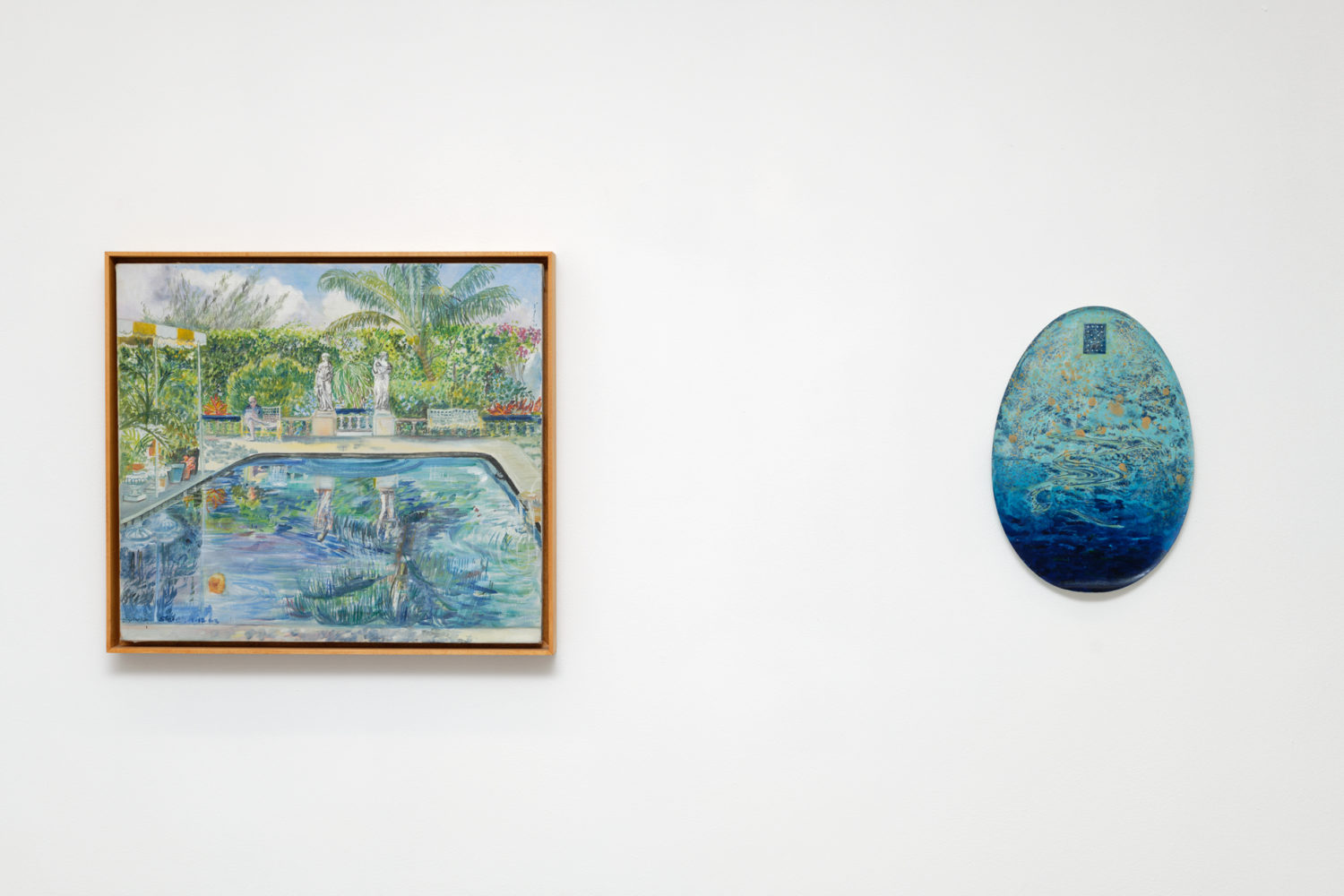 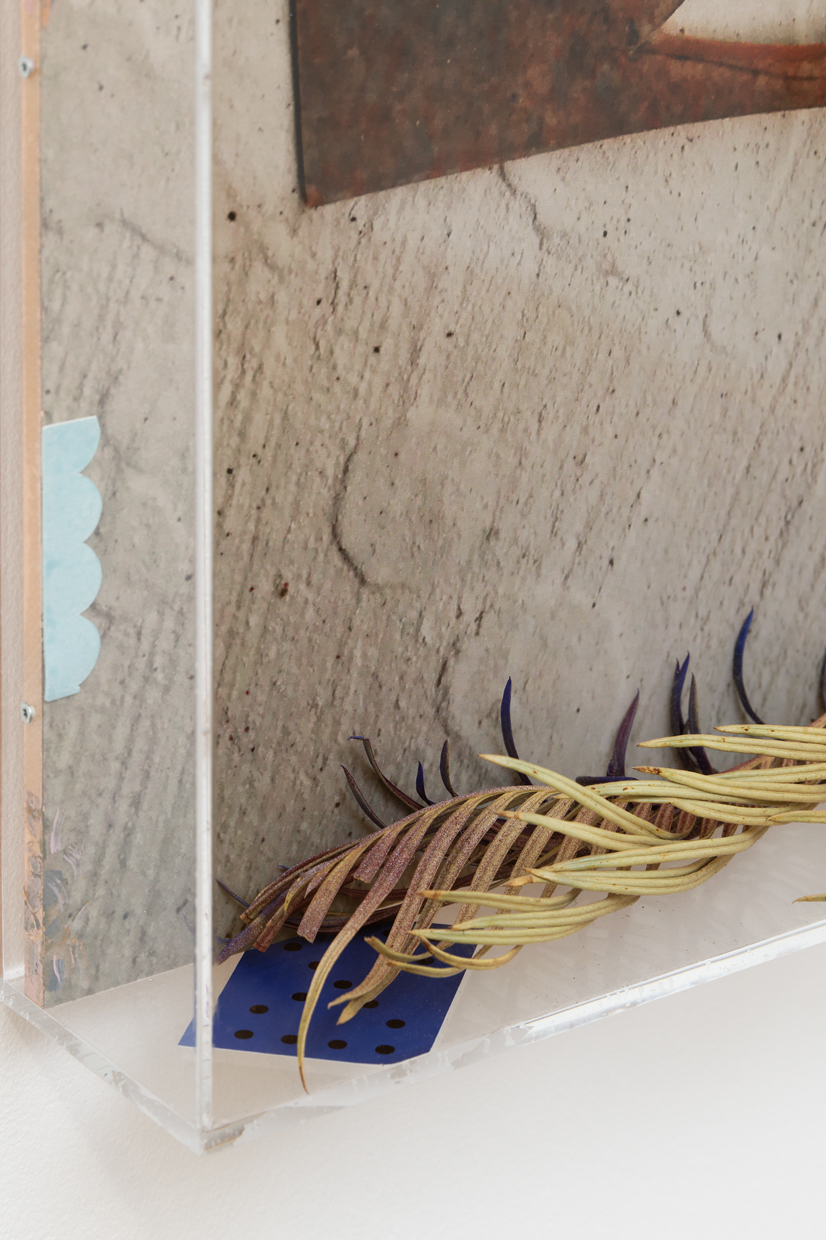 Niels Trannois a French artist born in 1976, now lives and works in Basel after a decade in Berlin. His practice as a painter goes way beyond the medium’s limits, extending into space, objects and photos, and opening up to joint authorship.

His work draws on fantasized images, lived moments to be shared and fictional correspondences rendered material in multiple forms. This aesthetic projection allows memories to resurface. Paint is deployed as if it were an organic substance with the ability to reveal the surfaces it covers. His pieces oscillate between figuration and abstraction by means of an invented language of signs and drawings, the use of collage, enhanced materials and fading, often fragmentary echoes of reality. Thus Trannois generates a symbolic universe haunted by the vulnerability of memory, a memory transmitted by traces and personal and collective enigmas.

Th entirety of Trannois’s exhibition In Praesentia at the Villa du Parc was inspired by the venue’s domestic atmosphere, which he infuses with delicate and amnesiac traces of a vanished personality who is presented by their absence. In the situated installations appearing like flashes in the mind, paint seeps like moss over materials and objects of a personal environment, generating transitional states, on the mental and material levels, between interior and exterior. The collaboration with other closely-attuned artists produces multiple versions of the missing identity. The exhibition experience deepens as visitors come across a painting by Sylvia Sleigh, a sound piece composed by Félicia Atkinson, a lamp designed by Polina Moroz, and work by Quintana E., a fusional entity whose members are Jessy Razafimandimby and Trannois himself.

Niels Trannois was born in 1976 in Flers, Normandy, and studied at the Villa Arson in Nice. He currently teaches at the HEAD-Geneva.

His solo shows in France and other countries include Nubia F1 at the RHCA gallery (New York 2014), ·· ̃\ˆ ̆ˆ ^\_ (moirée, la surface) at InExtenso (Clermont-Ferrand) and K.J. (Lethal psy ritual) at Supportico Lopez in Berlin.

His work has also appeared in many groups shows, notably Peintures in 2014 at the FRAC Champagne-Ardennes, the 2018 Ich, ich Sehe Dich at the lstituto  Svizzero in Rome, the 2020 La vie dans l’espace at the MRAC Sérignan, and as part of the Alpina Huus project in Switzerland (2017-21). The Villa du Parc presented a piece he made in collaboration with Aurélien Mole in the 2013 exhibition Sir Thomas Trope.

As a curator and teacher, he worked with his students to mount the exhibitions Fridges are not frigid at Archivio Conz (Berlin, 2019) and Wie zu Hause, Wo ich nicht Bin at Geneva’s Centre d’Art Contemporain in (2020). These works are currently on view as part of the group show Cat’s Cradle at the Basel Kunsthalle. In 2023, he will be featured in a solo show at the Windhager von Kaenel gallery in Zurich.